Gallipoli Myths is a Codex Entry featured in Battlefield 1. It is unlocked by collecting all Field Manuals in the chapter Be Safe of the singleplayer mission The Runner. 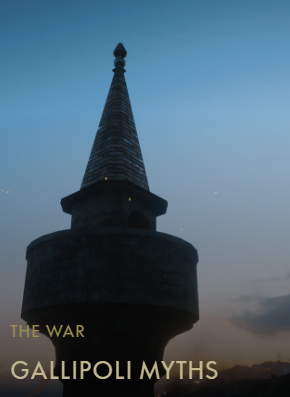 The Gallipoli campaign sparked many controversies with its failure. What seemed a promising strategy to end the war turned into a humiliating defeat for the Allies and a great victory for the Ottoman Empire. A new exhibition at the National Museum of the Royal Navy debunks many of the common misconceptions about the campaign and sheds new light on the historical situation. It is true that opening a new front so close to the Turkish heartland could have drastically shortened the war.

Had the British warships been able to push through the straits and into the range of shelling Constantinople itself, the pressure on the Ottoman Empire would have been too much to endure for long, but the Ottoman army was no pushover and breaking through the Dardonelles was not possible. In the field, the Ottomans were backed by German troops and officers, and they used German rifles and modern field batteries. While the British naval guns were hindered by their low arc of fire, the Ottoman field batteries could be concealed in the mountain.

The battle's effect on the Central Power' propaganda was enormous, and it gave the Ottoman military a big boost of confidence. In many ways, the failure of the attacks was because of the lack of competent Allied leadership. Once the troops had landed, neither General Hamilton nor General Monro had any clear strategy of overcoming the defenders. The lack of proper communications handicapped many promising situations, and hesitant commanders eroded the will and ability of their soldiers. The Allies finally retreated, as winning the battle with the troops and strategies available simply was not possible.

Retrieved from "https://battlefield.fandom.com/wiki/Gallipoli_Myths_(Codex_Entry)?oldid=343427"
Community content is available under CC-BY-SA unless otherwise noted.