The Gasser M1870 was a revolver chambered for 11.25x36mmR and was adopted by the Austro-Hungarian Cavalry in 1870. It was an open-frame model, with the barrel unit attached to the frame by a screw beneath the cylinder arbor. The arbor pin was screwed into the barrel unit and fitted into a recess in the standing breech. The cylinder was gate-loaded from the right side, and a rod ejector was carried beneath the barrel. The M1870 Gasser became the Austro-Hungarian cavalry revolver. Despite being outdated, it was liked among Austrian Storm troops during World War I for its stopping power.[1]

This item has a Codex entry: Gasser M1870 Revolver

"Though long obsolete by the start of the war, the Gasser was still favoured by Austrian stormtroops for its stopping power."

The Gasser M1870 is a gate-loading revolver featured in Battlefield 1. It is only available for the Assault kit.

The Gasser M1870 fills the role of high-damage, low rate-of-fire pistol for the Assault kit. The Gasser M1870 has one of the slower rates of fire among the revolvers, being faster than only the No. 3 Revolver. It makes up for this with a very high damage profile, being able to kill targets in two shots up to 22 meters away, and having the highest minimum damage, being able to kill targets in 5 shots or fewer at long ranges.

Like all class-specific revolvers (except the Auto Revolver), each cartridge has to be ejected and reloaded individually through a single port (comparable to the DAO-12 shotgun). This makes the reload for the weapon significantly longer than the Assault's other handguns.

Unlike other revolvers, the player may hold down Fire to automatically fire consecutive shots from the hip, guaranteeing its stated rate of fire. When aiming down sight, it fires in single-action, with a delay between every shot. 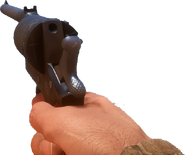