The Gasser M1870 Revolver is a Codex Entry featured in Battlefield 1. It is unlocked upon obtaining ten kills with the Gasser M1870. 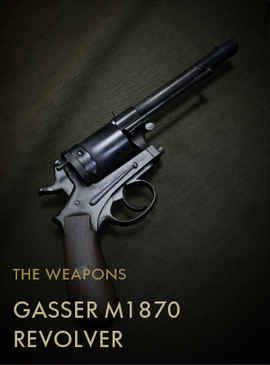 The Austrain Gasser M1870 Revolver was adopted as the standard sidearm for the Austro-Hungarian cavalry in 1870 and was the first in a line of Gasser models produced until 1918. The M1870 chambered a large 11.25mm centerfire cartridge in a 6-round cylinder that was gate-loaded from the side.

The only more powerful revolver cartridge at the time was the American .45. A noticeable design feature of the Gasser M1870 is its use of an "open-frame" with no bridge above the cylinder. It was a double-action revolver, meaning the hammer was first cocked and then released on the pull of the trigger, so the shooter did not have to manually cock the hammer before each shot.

At the time of introduction of the M1870, it was one of the largest and heaviest revolvers on the market. By WW1 the Gasser M1870 was outdated, but due to its great stopping power it became popular among Austrian Stormtroopers.

Retrieved from "https://battlefield.fandom.com/wiki/Gasser_M1870_Revolver_(Codex_Entry)?oldid=343155"
Community content is available under CC-BY-SA unless otherwise noted.