General Liu is a Codex Entry featured in Battlefield 1, introduced in the Battlefield 1: In the Name of the Tsar expansion. It is unlocked upon obtaining ten kills with the General Liu Rifle. 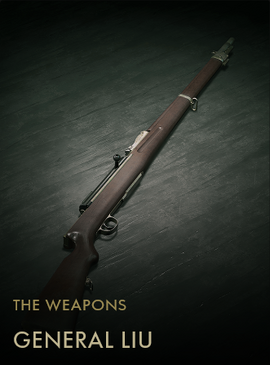 The General Liu Rifle is another of the obscure, experimental weapons of the WW1 era, whose history is not entirely clear. General Liu was a Chinese officer and weapons designer who was appointed head of the Hangyang Arsenal, where he began developing a self-loading rifle in 1913, based on the Danish Bang muzzle gas-trap system. Prototypes of the Liu rifle were built at the Hangyang Arsenal and were tested successfully, but China lacked the means to mass-produce the weapon. Instead General Liu came to USA a few years later and contracted an American company to produce the machinery necessary for mass-production, and Liu also brought some of the prototypes for testing in USA. A freighter was loaded with more of Liu's rifles and the machinery to manufacture them, but the ship sank in transit back to China. The machinery was salvaged from the freighter and stored in a warehouse in Shanghai, but during this time General Liu suffered a stroke and died. Without Liu's leadership, the machinery was neglected and no more of his rifles were built. Years later the machinery was repurposed for the construction of other weapons. General Liu's rifle would be China's closest attempt at an indigenous self-loading rifle before WW2.

Retrieved from "https://battlefield.fandom.com/wiki/General_Liu_(Codex_Entry)?oldid=343222"
Community content is available under CC-BY-SA unless otherwise noted.