Geology is a Codex Entry featured in Battlefield 1. It is unlocked by killing five enemies with Rifle Grenades in the chapter The Runner of the singleplayer mission The Runner. 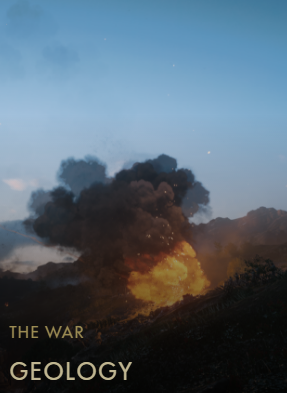 Geologists were tasked with locating the best points for new trench lines and fortifications or with supporting engineers tunneling through the earth. They used seismographic equipment that could locate counter-tunneling efforts by the enemy. They also had to determine the outlines and inner structure of hills and mountains before digging could being.

These engineers examined the fundament for chalk or sand, and surveyed the landscape ahead of them to determine the strength of the enemy's positions. Geologists on the Italian front explored the high mountain crests of the Alps, where the deep ravines and steep cliffs could erupt in avalanches caused by tunneling and exploding shells. German geologists on the Eastern Front studied the ever-changing winter and spring weather to determine which sections of the thawing and unstable ground could support the passage of troops and machinery.

In the British advance through Mesopotamia, geologists not only located water sources, they also determined possible locations of oil and metal vital to the war economy.

Retrieved from "https://battlefield.fandom.com/wiki/Geology_(Codex_Entry)?oldid=343419"
Community content is available under CC-BY-SA unless otherwise noted.