The Gewehr 98 is a Codex Entry featured in Battlefield 1. It is unlocked upon obtained ten kills with the Gewehr 98. 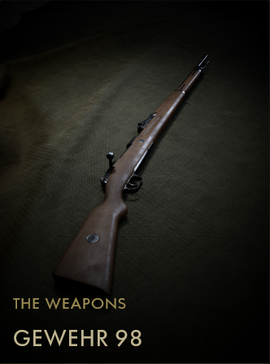 Arguably the culmination of bolt-action rifle developments of the late 19th century, the Gewehr 98 was the German standard infantry rifle from 1895 to 1935 and one of the most famous weapons ever. At its introduction, it made the service rifles of many other nations obsolete and led to many competing designs, especially as they came up against the excellent performance of the G98 in various conflicts at the turn of the century.

In 1908, the shortened Karabiner 98AZ was approved and issued to cavalry and other armed branches that needed a more compact weapon. The 98AZ would later be used by German Stormtroopers since it was better suited for trench warfare. The Gewehr 98 or version of it saw service with a multitude of nations, including the Ottoman Empire, Spain and Sweden. The later Karabiner 98K was closely based on the G98 and was the main German rifle throughout the next world war.

Retrieved from "https://battlefield.fandom.com/wiki/Gewehr_98_(Codex_Entry)?oldid=343132"
Community content is available under CC-BY-SA unless otherwise noted.