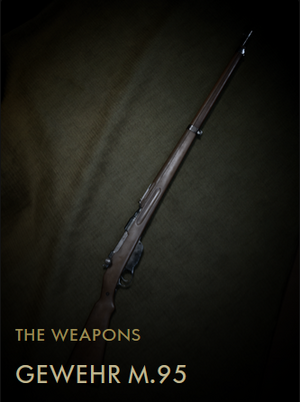 The Austrian Gewehr M. 95 is unusual in featuring a straight-pull bolt-action, allowing its action to be operated by simply pulling the bolt handle straight back and forth. This makes the M. 95 one of the fastest-firing bolt-action rifles, and also led to the nickname Ruck-Zu(ru)ck - meaning "back and forth" in German. It was the standard infantry rifle of the Austro-Hungarian army from 1895 until the fall of the empire in 1918.

The M. 95 was also used in large numbers by Bulgaria, and its action was copied almost exactly for the infamous Canadian M1905 Ross straight-pull bolt-action rifles, the M. 95 was more sensitive to mud and dirt, but still had a reputation of reliability if handled with some care.

One of the most famous variants of the M. 95 was the short rifle Stutzen which was primarily used by Stormtroopers, and the M. 95 was also used as a sniper rifle with telescopic sights. Some unusual equipment for the M. 95 were Model 1916 Luminous night sights and a "wire destroyer" that allowed a rifleman to grab and shoot through barbed wire. Since the straight-pull action was simple movement, it is well-suited for semi-automatic conversions, and during WW1 both Russia and Bulgaria experimented with such conversions by fitting gas tubes and pistons on the side of Austrian straight-pull rifles.

Retrieved from "https://battlefield.fandom.com/wiki/Gewehr_M.95_(Codex_Entry)?oldid=343133"
Community content is available under CC-BY-SA unless otherwise noted.