For other uses of "Ghost Town", see Ghost Town.

Ghost Town is a map featured in Battlefield 2: Special Forces. It is a battle between the Special Air Service and the Spetsnaz.

"An entire Russian light mechanized company was recently wiped out while passing through this deserted ghost town on the Caspian Coast, leaving smoking wrecks littering the empty streets. Fearful that sensitive material may be uncovered within the wreckage, Spetsnaz agents have been sent to secure the area. Mindful of the Russian concerns, the British have secretly deployed the SAS to uncover the Russian secrets before the Spetsnaz can arrive."

The British SAS starting base consists of a large building with a small parking lot in front of it. The building is split into two parts; one is an office building that goes through the western parking lot to the small loading dock. The other building is a caged hallway that can be shot through, which leads to the flag. The ladders on the office building lead to a TOW emplacement; the ladders on the right take the player to a higher part of the building. An MG emplacement is near the edge of the base. It spawns a light vehicle, ATV and an APC depending on who holds the flag. The UAV Trailer is near the APC spawn, the Satellite scan is located across the street from the office building front entrance, the artillery is located behind the second building.

The convoy flag is located closest to the SAS starting base situated between building, gaining the high ground on the flag can become extremely useful for barraging the flag if the other team holds it with Grenades, Grenade launchers and Tear Gas. The flag is littered with destroyed BTRs and vehicles that can be used for cover.

The central square flag is closest to the Spetsnaz base. It consists of a few apartment buildings, almost all of which have ladders to the rooftops. The flag spawns an ATV and a stationary MG when captured. The most notable point is the tower, the highest point in the map besides the apartment building near the British SAS starting spawn. This spot gives a clear view of the Spetsnaz starting spawn and the Convoy flag. Multiple buildings surrounding the flag can be used to defend the flag or snipe.

The Suburbs flag is the starting point for the Spetsnaz, with the same setup as the SAS spawn—one APC, Squad transport vehicle, MG emplacement, AT emplacement and two ATVs. The bridge that is the exit point for the spawn can be destroyed, which forces the Spetsnaz team to take the second bridge—the one the RU must cross if in a 32/64 player server. The Artillery alongside the UAV trailer is located on the hill near the APC spawn. While the Satellite scan is located behind a building near the Vodnik spawn.

The 32 map variant pushes the SAS back across a river to another base.

The SAS Staging Area is the starting point for the SAS. The layout is an electrical powerplant, a few sheds and a makeshift helicopter landing area. The shed near the main flag contains an LAV-25 and an AIL Raider. A UH-60 Black Hawk spawns near the edge of the of southern base alongside the Satellite scan alongside a AA emplacement. A ladder below the bridge leads up to where the flag is. There are two artillery pieces—one located close to the jetski spawn and the other near the UAV trailer.

The south bridge is the closest flag to the SAS. Its layout consists of a small brick fence with a building with a ladder behind it. The capture radius is protected to the east, its open to the west. A Mobile AA spawns here.

The south side is one of the two bases that can spawn an attack chopper (AH-64 Apache or Mi-24 Hind). The capture radius is the top of the building; the player must climb two ladders to reach this. The grappling hook can be used to various usages to climb up the buildings avoided possible claymores or players attempting to ambush the stairway. Its also possible to use the Zipline to cross to the Upper North Side flag. Two ATVs, an MG, and a Manpad emplacement will spawn once captured.

Same layout as 16 player version, although the ATV that spawns there is replaced with an AA emplacement.

The Spetsnaz starting base; the layout is simple, with a few buildings and a makeshift helicopter pad behind a building near the flag. The bridge can be destroyed, like the SAS base. A TOW missile is located overlooking the entrance to the base. The UAV trailer is located near the TOW missile. One of the two artillery positions are located near the helicopter span while the other is near the boat spawn. The Satellite scan is near the entrance of the bridge.

The 64 player variant is the same as 32, although it includes several new capture points.

Same as the 32 variant, except an M1A2 MBT appears in the shed and a Jet Ski near the RHIB, with one of the Artillery pieces moved to the Oil Field base.

The Oil platform is the secondary starting point for the Spetsnaz. It features an Artillery piece, two Jet Skis, and an RHIB boat. The layout consists of a loading dock, a small office building with an LMG Emplacement facing the Waterfront flag and a small boat. There are multiple containers and boxes alongside explosive barrels to use as cover.

Same layout as 32, except a jet ski spawn is replaced with an ATV.

The Waterfront is an open street on the east side of the town. The layout is wide open on both sides. There is little cover.

Same layout as 32, except a jet ski spawn is replaced with an ATV.

Same as the 32 variant, except a T-90 MBT appears in the shed and a Jet Ski near the RHIB, with one of the Artillery piece moved to the Oil Field base.

The Oil Field flag is the secondary spawn for the SAS at the beginning of the round. It holds the second SAS Artillery piece, alongside an RHIB boat, jet ski, and an LMG emplacement in the small building facing the Oil Platform base. The oil rigs can be climbed and used as a sniping position or to use a zipline to cross to the Oil Platform base or the town. 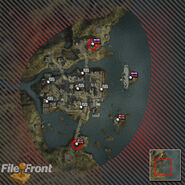 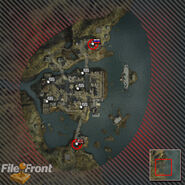 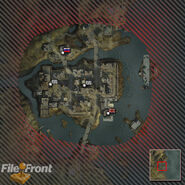 16-player singleplayer variant
Add a photo to this gallery
Retrieved from "https://battlefield.fandom.com/wiki/Ghost_Town_(Battlefield_2)?oldid=346098"
Community content is available under CC-BY-SA unless otherwise noted.