Giants of the Seas is a Codex Entry featured in Battlefield 1. It is unlocked upon destroying a turret of an enemy Behemoth. 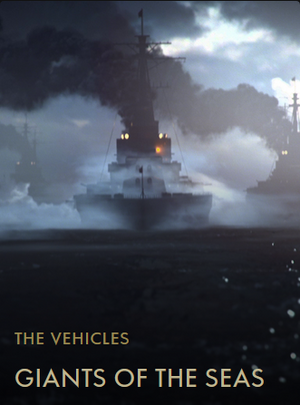 The naval arms race before the war had given the German High Seas Fleet powerful heavy dreadnoughts and modern battlecruisers that challenged the strongest navy in the world - that of Great Britain. Able to carry up to 12 30.5cm (12in) naval guns while displacing over 25,000 tons of water, the German dreadnoughts of the Nassau class secured their ports in the North Sea and kept Russian warships from shelling the Baltic coastlines. Knowing that they were still superior in numbers but not undefeatable, the British battle fleet patiently patrolled the North Sea, creating yet another stalemate of the war.

Throughout the war, German battleships conducted small raids and hit-and-run tactics on British coastal towns until both navies finally met in a huge battle near Jutland on May 31st, 1916, when 250 battleships, cruisers, destroyers, torpedo boats, and pre-dreadnoughts made contact. High-caliber guns punched through armor and compartments, exploding ammunition stores and tearing off gun emplacements. 25 ships were destroyed that day and many others barely limped back to port. Both sides would continue building bigger battleships, stronger and better cruisers, and heavier dreadnoughts, but the power balance between the two strongest navies of the world would never be broken until the end of the war.

Retrieved from "https://battlefield.fandom.com/wiki/Giants_of_the_Seas_(Codex_Entry)?oldid=343277"
Community content is available under CC-BY-SA unless otherwise noted.