"Get your fangs out, Hawkins. We're hunting big game today."

— The pilot in the beginning of the mission.

Going Hunting is the fourth mission in the singleplayer campaign of Battlefield 3. Lt. Jennifer Hawkins, a Weapons System Officer on a F/A-18F Super Hornet, takes off from the aircraft carrier USS George H.W. Bush (CVN-77) stationed in the Persian Gulf to engage enemy targets.

The mission begins as Hawkins meets up with her pilot below deck on the USS George H.W. Bush, and is briefed on the mission ahead. The mission the pair had to complete was to conduct air strikes against military targets and neutralize Al-Bashir in Mehrabad Airport in Tehran, but the pilot noted that Iranian jets were already in the air. The pair make their way onto the flight deck, passing several naval personnel on their way to the jet, an F/A-18F Super Hornet.

Putting on her helmet once reaching the aircraft, Hawkins climbs into the rear seat of the Super Hornet, and activates the Multi-Function Displays in front of her seat, and closes the canopy. Her pilot then begins to run through pre-flight checks, starting with checking the flaps and stabilizers on the aircraft. Hawkins first visually checks the port side of the aircraft, then the starboard side, before signaling that the aircraft was ready for take-off. Next, Hawkins activated the Helmet Mounted Display, checking that the cannon, Sidewinder missiles and flares were all working, before giving the final go-ahead for launch. Shark 4-2, the wingman to Shark 4-6, Hawkins' jet, was catapulted off of the ship first, before 4-6 is catapulted moments later. Flying a loop around the US fleet in the ocean, 4-2 and 4-6 link up and proceed towards their objective in Tehran some 1500 kilometers away.

The two jets climb up into the cloud layer, experiencing some minor turbulence, but break through above the cloud cover. However, 4-2 notices a radar contact, several miles out, without an IFF tone signalling they were friendly. Suddenly, two Iranian Su-35S fly past, firing cannon rounds towards the US jets. 4-2 and 4-6 break formation, with 4-6 going for one of the Iranian jets that had broken right, whereas 4-2 went for the one on the left. However, the Sukhoi that 4-6 was hunting down pulled off a Pugachev's Cobra, managing to get behind 4-6 and starting its pursuit.

Hawkins now began to launch counter-measures to avoid the Iranian missiles. The pilot of 4-6 then bleeds the jet's speed, bringing round the F-18 so that Hawkins can engage the Flanker with cannon and Sidewinder missiles. Engaging the Iranian jet, Hawkins destroys it, but not before the Iranian jet deploys flares to throw the aim off of some of the missiles that Hawkins fired. However, eventually the jet is destroyed, and 4-6 flies towards the dogfight between 4-2 and the remaining Su-35. Pulling up behind the Flanker, Hawkins engages and destroys the jet while 4-2 breaks away, before linking up again with 4-6.

However, as the F-18s link up again, 4-2 is locked onto and destroyed by another pair of Su-35s, who lock onto 4-6 as well. Hawkins again deploys counter-measures, before engaging and destroying one of the Sukhois who had flown towards the port side of her jet. The second jet is also caught out and destroyed, and Shark 4-6 joins with the strike formation heading towards Mehrabad Airport.

After taking out the jets, Hawkins flies towards Mehrabad Airport, tasked with clearing the airspace of ground threats so that the A-10s can launch their attack runs. Bulldog 3-2, however, is struck by AA fire, and is destroyed, prompting Hawkins to engage the SAMs with AGM-88 HARM missiles. Switching to the F-18's targeting pod, Hawkins locks onto and fires three HARM missiles, destroying three SAM positions through heavy cloud cover.

Next, after seeing fuel tankers heading onto the main runway, Hawkins is told to target Iranian jets for bombing runs by a supporting flight of F-18s. Four parked Su-35s are targeted and destroyed, alongside three moving jets that were already fuelled and ready for take-off. With the airspace cleared, Reaper 1, the overall controller for the mission, spies three vehicles moving onto the runway, as well as a helicopter. As the helicopter lands, Reaper 1 identifies the occupants of the vehicles as including Al-Bashir, and tasks Shark 4-6 to engage and destroy the helicopter before it takes off.

Designating the area with the targeting pod, Hawkins calls in an A-10, Bulldog 3-3, to destroy the helicopter with cannon fire, which it does. Hawkins also directs Bulldog 3-3 onto the survivors of the airstrike, who were running for cover. Again, the cannon fire of the A-10 eliminates the runners. Reaper 1 calls a halt to the airstrikes, as friendly troops were moving into the area, and 4-6 is directed back to the USS George H.W. Bush, landing on the carrier without mishap after dark. 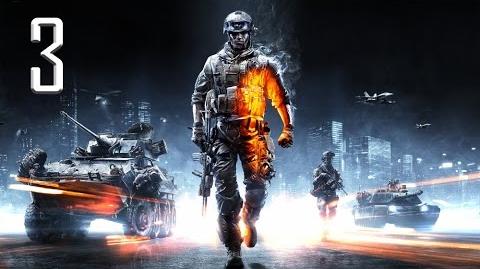 Retrieved from "https://battlefield.fandom.com/wiki/Going_Hunting?oldid=341265"
Community content is available under CC-BY-SA unless otherwise noted.