Gone Chemical is a Codex Entry featured in Battlefield 1. It is unlocked upon collecting all Field Manuals in the chapter Fog of War in the Through Mud and Blood mission of the singleplayer campaign. 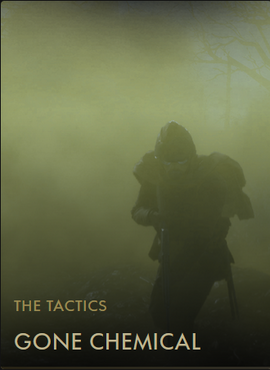 Despite the 1899 Hague Convention treaty that banned the military use of poison gases, all major combatants of the war used them at one point or another. Tear gas, chlorine gas, phosgene gas, or the dreaded mustard gas; as the war went on the chemicals grew even more dastardly. The horrors of chemical warfare caused worldwide public indignation that continued long after the war.

In actual fact, chemical weapons were relatively ineffective. Just 3% of those who suffered a gas attack died, but the effect to the eyes and lungs were often long lasting. It was the families of the victims sent home, who watched their loved ones slowly and painfully die over weeks and months, who were the hardest hit.

Retrieved from "https://battlefield.fandom.com/wiki/Gone_Chemical_(Codex_Entry)?oldid=343380"
Community content is available under CC-BY-SA unless otherwise noted.