Gotha G.IV is a Codex Entry featured in Battlefield 1. Detailing information about the Gotha G.IV, it is unlocked by killing ten kills with fighter planes. 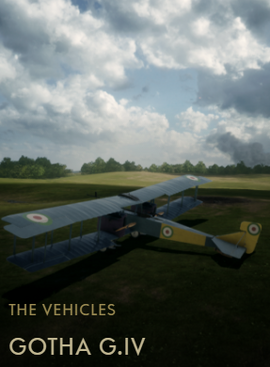 The Gotha G.IV was a massive bomber flown by pilots in the Imperial German Air Service during the Great War. It was first and foremost a strategic bomber that continued to bomb London as part of the "total war" in an attempt to demoralize British support at home, a role initially held by the great Airship raids over the British capital. Austria-Hungary also used this plane but used local engines and machine guns.

Some versions of the plane featured a tunnel in which the gunners could access a machine gun position in the rear underside of the aircraft, where it was particularity vulnerable.

Retrieved from "https://battlefield.fandom.com/wiki/Gotha_G.IV_(Codex_Entry)?oldid=343279"
Community content is available under CC-BY-SA unless otherwise noted.