Gotha Raids on London is a Codex Entry featured in Battlefield 1. It is unlocked by taking down the bombers in the Forte et fidele chapter of Friends in High Places. 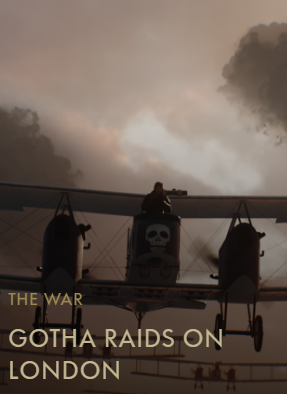 By 1917, London had already experienced the danger of Zeppelin bombing runs for two years, but now the fearsome heavy Gotha Bombers appeared in the skies.

Outfitted with additional fuel tanks and able to transport as much as 330 lbs of conventional and incendiary bombs to Southern England, they were tasked with not only destroying vital parts of the British war industry, but also exhausting the British will to fight.

The population was were initially shocked, and sent - for the first time - many children to the safety of the countryside, but soon the British air defenses and the Royal Flying Corps were up to the task of defending their homeland.

Retrieved from "https://battlefield.fandom.com/wiki/Gotha_Raids_on_London_(Codex_Entry)?oldid=343395"
Community content is available under CC-BY-SA unless otherwise noted.