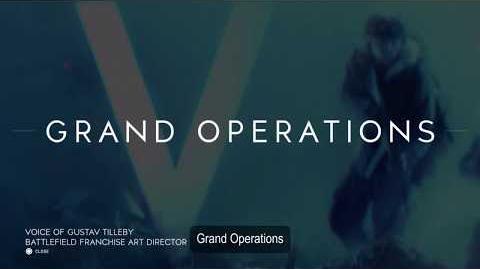 Grand Operations is a narrative-based multiplayer gamemode introduced in Battlefield V. Unlike Operations in Battlefield 1, this mode splits matches over the course of up to four fictional days, providing players with four unique and distinct game modes. Additionally each with their own custom rules and map layouts. Players relive various vast historical battles across these four days, with the outcome of each day affecting a team's status in the next such as amount of tickets, ammunition, reduced vehicle respawn time, and other resources.

Grand Operations starts with Airborne on day one. Attackers will parachute onto the map from aircraft that fly across the map periodically, where their goal is to defeat the defenders by destroying their four artillery cannons.

Attackers have the option to eject from the aircraft at any point of the map, however defenders can take down these aircraft with anti-aircraft guns and kill any attackers still inside. Once on the ground, attackers must pick up one of a possible two simultaneously active bombs and arm them on the artillery guns. At this point defenders have a chance to defuse the bomb if they can reach it before the fuse runs out and it detonates. The attackers win if all four objectives are destroyed. In the event that any objective survives, the attackers run out of respawn tickets, or the round timer runs out, the defenders win.

During Airborne phase, Weather will be attacker-friendly such as fog, rain or set during night time.

"The optional (day 3 draw induced) conclusion of a Grand Operation where the battles take place in a shrinking combat area and no respawns are allowed."

Most Grand Operations will end on Day 3 of the match but should both teams end the match in a draw, the fourth day may commence, using the Final Stand gamemode. The objective of the mode is to eliminate all members of the opposing team. In this mode players will not be able respawn once killed and their amount of ammunition and health will be dependent on the previous day's events.

On day four of Battle of Hannut, it is also possible to find and use abandoned vehicles scattered throughout the battle area in Final Stand. These generally consist of transport vehicles at the map sides and tanks towards the map center. The presence of neutral tanks is communicated to players at the start of a round via important message. After a player enters within sightlines of an abandoned vehicle, it becomes marked on their team's map. The vehicles start the round at full health and with their full supply of ammunition, but cannot be resupplied.

The conditions to enter Final Stand are:

During Final Stand phase, weather will be set as "Extreme" such as Snowstorm.

Set in France, during the ongoing German invasion as part of Case Yellow; it details British efforts along the north-western sector of the Escaut River, part of the Maginot Line, in their vain attempt to slow the German armored spearhead from reaching the Channel Coast. Despite slowing down the advance, British forces were eventually pushed back to the English Channel, prompting the evacuation at Dunkirk.

Set in the Battle of Belgium as part of Case Yellow; this marks the end of the Phoney War that lasted until 10 May 1940, formally beginning the Western Front of WWII; this follows the largest tank battle at the time from 12 to 14 May, 1940. Despite an indecisive result, subsequent attacks on Belgian soil opened the gates to the French border for the Germans, eventually leading up to multiple frontlines on French soil. This Operation features Germany as the attackers and the British as the defenders. This was released on 21 February 2019 as part of Lightning Strikes.[1][2]

This Operation follows the Norwegian Campaign, specifically the British landings which occurred at Narvik and subsequent efforts to push the Germans out of the country, between 28 May to 8 June 1940, before pulling out due to the ongoing Battle of France, eventually leaving Norway and Narvik's iron ore in German hands.

This Operation takes place in the North African theatre between 15 to 17 June 1941, and sees the British attacking German strategic positions in Halfaya Pass and its airbases beyond, in an attempt to lift the siege of Tobruk. However, it ended in an Axis victory, due to Erwin Rommel's well-prepared defenses.

This Operation is set during the Battle of the Netherlands between the 10th and 14th of May 1940, as part of Case Yellow, and revolves primarily around the Battle of Rotterdam, involving paratroopers attacking the city itself, which ended in German victory after the city was destroyed in the Rotterdam Blitz, resulting in civilian casualties and the eventual control of the Netherlands by the Germans.

The Operation features Germany as the attackers and the United Kingdom as defenders of the city.