The Growler ITV (Internally Transported Vehicle) is a light armored jeep-like transport vehicle used by the United States Marine Corps, produced by General Dynamics and American Growler. It has two variants: the M1161 and M1163. The development of the Growler first began in 1999 when the USMC wanted a vehicle that can be transported inside a V-22 Osprey, initially the design was inspired from the M151 MUTT and uses much of the same components, however the USMC was heavily displeased because of the dated parts.

The final design included new internal components, with the few specifications being: Diesel Engine, 4x4 Suspension and it can reach up to 105kph (65mph). The two variants: M1161 and M1163, the M1161 is used as a light utility transport, and the M1163 is used to tow the US designated M327 120mm Mortar (RT F1). The vehicle is lightly armored, and it can mount an M2 Browning heavy machine gun or the M240C light machine gun.

Personal equipment
"Used by the USMC starting in 2009, the Growler is the only transport vehicle that fits in the V-22 Osprey."

The Growler ITV is a vehicle that appears in Battlefield 3.

In the Single Player campaign, the vehicle is seen as part of the USMC convoy in Rock and a Hard Place, and is unusable by the player.

In Multiplayer mode, it is the US equivalent to the Russian VDV Buggy. The vehicle can transport up to 3 players; - a driver who controls the Growler, a gunner who operates the mounted 50. Cal and a passenger who can use their infantry weapons while in the vehicle. The vehicle is resistant to small arms fire, but passengers are very exposed to fire through the windscreen, open cab and rear. The vehicle can be disabled by simply throwing a M67 or 40mm Grenade into the vehicle, usually killing its occupants or can be disabled with one shot with an RPG-7, SMAW or FGM-148 Javelin. 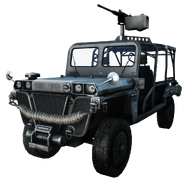 The third-person view of the Growler ITV.

The M1161 ITV is the American counterpart to the Chinese LYT2021 and the Russian VDV Buggy. It can be found at US deployments, as well as flags controlled by the Americans. The M1161 is resistant to small arms fire, but the crew are largely exposed due to the lack of a windshield and doors -- however, the vehicle itself is vulnerable to anti-tank weaponry and explosives. If the vehicle drives into a static object at sufficient speed, the vehicle can catch fire and suffer significant damage.

The vehicle has space for three players: a driver who controls the vehicle, a gunner who operates the rear mounted M2 Browning machine gun, and a passenger who can use his primary weapon and equipment.