The OTs-14 Groza (Russian: Гроза, "Thunderstorm"; also known as the OC-14) is a modular Russian bullpup Assault rifle based on the AKS-74u and developed in the early 1990s. The Groza was designed for Russian Special Forces and Internal Affairs Ministry as an dedicated CQB weapon, though its modularity allows it to perform as a carbine or sniper rifle, as well as being capable of mounting a GP-30 grenade launcher, given the situation.

The OTs-14-4A-02 variant is a short barreled "Special Carbine Variant" equipped with a Suppressor which uses 9×39mm WP rounds as the AS VAL or VSS Vintorez, and the OTs-14-1A-01 variant is a short barreled Carbine version of the Groza, but has a built in Vertical Grip and no attached suppressor, using 7.62×39mm M43 rounds as the AK-47/AKM assault rifles. The Groza and its variants are currently used by various branches of the Russian Armed Forces, including FSB units and the MVD's OMON Special Operations soldiers.

The OC14 was intended to be a weapon in Battlefield 2: Special Forces, but its exact name is unknown, and the only references to it are two lines in constants.py that list a weapon with the code rurif_oc14 as an assault rifle for ranking purposes. It was also intended to be an unlockable weapon, as the second time rurif_oc14 appears in this file it appears in the section titled xpack1 unlocks.

Unlike the similarly cut APS or Spear Gun, no pictures of rurif_oc14 have been found.

Two variants of the OTs-14 were introduced in the Weapons Crate Pack of Battlefield 4; the Groza-1 carbine and the Groza-4 Personal Defense Weapon. They were added along with the other Weapon Crate weapons to the Community Test Environment on March 30, 2015 for Alpha testing.

Both weapons are available by default, allowing new players to access them from the start.

The Groza-1 is an all class Carbine. It does an impressive 30 damage at close quarters, meaning it can get a 4 shot kill. It also has a high rate of fire at 725 RPM, meaning that this is a devastating CQB weapon. On top of that, it also has good hip fire accuracy. However, it also has massive vertical recoil and low ADS accuracy, limiting it to close quarters.

It has an integrated Compensator and a Vertical Grip by default, meaning that it cannot be removed. 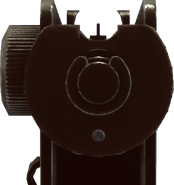 The Groza-4 is a Personal Defense Weapon for the Engineer. The Groza-4 is an integrally suppressed weapon, so it will never show up on the radar. However, it has lower close range damage than the Groza-1, at 26 damage, though this is still enough for a 4 shot kill. It also has a smaller magazine at 20+1 rounds, and a slower rate of fire. However, it is still a very capable PDW. 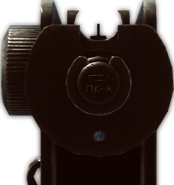 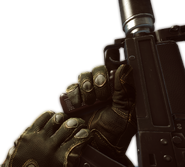