Guerilla Warfare is a Codex Entry featured in Battlefield 1. It is unlocked upon collecting all Field Manuals in the Hear the Desert chapter of Nothing Is Written. 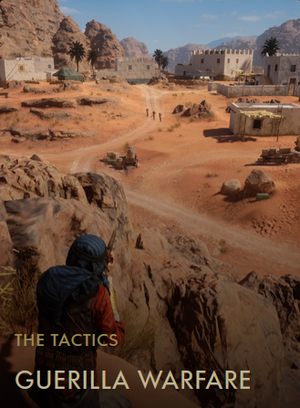 The Arab Revolt had captured Mecca and many Red Sea ports, but by the end of 1916 the small forces of the Revolt were in full retreat. The advancing Turkish army outmatched the Bedouins and their mercenary allies in every way. T.E. Lawrence knew that though the Bedouins were brave and courageous fighters, they had no real chance of winning in a direct fight against a modern Turkish army that was equipped with machine guns and artillery.

The Bedouins had no military training, knew nothing of trenches and fortifications, and had no experience with modern technology. The sight of airplanes easily threw them into disarray and many refused to get into the safety of dugouts. Instead, their strength lay in aggressive surprise attacks and so Lawrence advised the leaders to wage guerilla war instead. They would attack Ottoman outposts, weakly defended garrisons, and the most valuable supply line - the Hejaz Railway - in sudden hit-and-run techniques. Around the railway, they ambushed Ottoman patrols, plundered small towns loyal to the Empire, and burned down supply and train stations.

Lawrence judged that the Bedouins were too focused on booty to follow complex long-term strategies, and too free-minded to be drilled in foreign weapons or to endure command. They were irregulars that fought without formations and as individuals rather than as teams, but once unleashed they would not be stopped until they had successfully overrun the defenders or plundered all valuables from a derailed Hejaz train or one of their many supply posts. They would disrupt rather than destroy, sting rather than punch. It was a war without officers, without trenches, and without alcohol. Instead, there were long trips through the desert on camelback, the hardship of the hot desert winds, and nearly constant ambushes.

Retrieved from "https://battlefield.fandom.com/wiki/Guerilla_Warfare_(Codex_Entry)?oldid=343376"
Community content is available under CC-BY-SA unless otherwise noted.