The two factions differ only in that the United States Marine Corps fights the Russian Army rather than the Middle Eastern Coalition. Multiple FAV's and DPV's lay scattered about the outskirts of the map for players who wish to travel around quickly.

"Seeking to take control of the valuable Oman oil reserves the Marine Forces must maintain air superiority over the Russian Forces to seize this valuable land."

The USMC spawns on the USS Essex with six RIBs, one LAV-25, two F-35B's, an AH-64, a MH-60 Knight Hawk, and two Stingers for air defense. Another AH-64 will spawn when the Russian forces will take the A flag, and the MH-60 and RIB's will spawn very quickly after the last has left the base.

The Russian Army spawns at the Airfield with three Vodniks, one BTR-90, two MiG-29 Fulcrums, a Mi-17 Hip, a Mi-28 Havoc, and two IGLA's for air defense. A T-90 will also spawn about a minute in to the game near the two helipads. The Vodniks and Hip spawn very quickly after they have left the vicinity of the base.

The Beachhead is the closest control point to the US Base and once captured, it will spawn two HMMWV's, one LAV-25, one M1A2 Abrams, a DPV, another Stinger site, and a BGM-71 TOW just outside on a hill, overlooking the main entrance to the base. When under Russian control, a BTR-90, a T-90, two Vodniks, an FAV, an IGLA, and an HJ-8 will spawn here. Being the closest base to the US amphibious assault ship, it is incredibly important to hold this base as the USMC can easily become spawn camped if it is not taken back.

The Wrecked Train is a bit closer towards the US base and can be reached very fast with the Knight Hawk or a RIB and DPV and is about equidistant from points A and D, much like the Gas Station. If captured, a Stinger or IGLA will spawn on the train car with the concrete pipes and a BGM-71 TOW or HJ-8 will spawn near the flag. No other vehicles spawn here, but an FAV can be found down by the river, away from the site. Much of the heavy fighting occurs here as it is the only middle base to have an anti-air site, making it very useful to defend against helicopters and jets.

The Gas Station is a bit closer to the Russian base and can easily be reached by the Hip or a Vodnik, but is about an equal distance from point A and D. Once captured, it will spawn a Vodnik and HJ-8 for the Russians and an HMMWV and BGM-71 TOW for the Americans. This base is hotly fought over for the control of the middle ground and if not defended, it can easily fall to enemy hands. The hotel is a good spot for Recons to snipe of enemies trying to take over the station.

The Construction Site is the closest base to the Russian base. When captured, it will spawn four FAV's, one T-90, an IGLA on top of the construction site, and an HJ-8 overlooking point C, just outside the base. When under control by the Americans, four DPV's, a BGM-71 TOW, and Stinger will spawn here. The base can be easily reached by the Mi-17 Hip or a Vodnik, and the tower crane overlooking the Construction Site is a wonderful sniping spot for Recon players, but it can take a long time to climb, even with Power Climb. 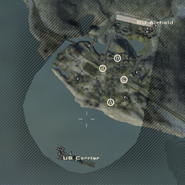 Gulf of Oman as seen on Play4Free 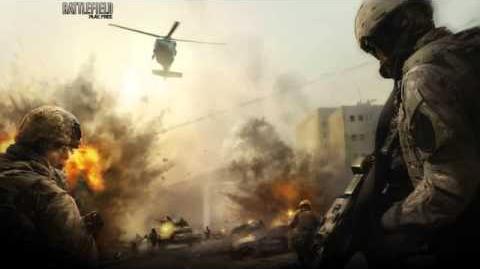 Battlefield Play4Free - Oman Loading Theme
The loading theme used for Battlefield Play4Free
Add a photo to this gallery
Retrieved from "https://battlefield.fandom.com/wiki/Gulf_of_Oman/Battlefield_Play4Free?oldid=359362"
Community content is available under CC-BY-SA unless otherwise noted.