For similar modes in other installments of the Battlefield series, see Tutorial.
Not to be confused with the feature from Battlefield Heroes, Workbench.
See also: Battlefield Hardline Customization

"Really showoff your style and customize the look of your weapons"

The Gun Bench is a feature introduced in the Battlefield Hardline: Betrayal. It is available for owners of the expansion and Battlefield Premium members, accessible from the main menu on consoles and the loadout menu on Battlelog for PC.

It allows players to customize up to five primary weapons with custom reticles, colors, custom camouflages, visual wear and tear, as well as a stat tracker to show how much damage has been done to the enemy.[1][2] It also features a shooting range, dubbed the Gun Range, that allow players to test their newly customized weapons.

All customization options are merely cosmetic and technically do not provide any gameplay advantages. Players may turn off customization from the Gun Bench in the options menu to make themselves and other players appear to them as if they are wearing normal camouflage.

Most primary weapons are available to be customized in the Gun Bench except weapons that already have very limiting customization options, such as the M1A1. The Gun Bench allows players to have access to up to five different customized weapons at any given time. Three weapon slots are available from the start with the completion of the Weaponsmith and Master Weaponsmith assignments adding two additional weapon slots. Three different customization options are offered in the gun bench: Sight reticle, weapon camouflage, and Agent camouflage.

The Gun Bench offers sixteen different reticle options, excluding the default. This includes all reticles found in all optics in the game as well as new ones that are designed for short range. After selecting a reticle, its color and size may then be changed based on user preference.

There are fourteen different camouflage stencils available for weapons. While initially black and white variants of existing camouflage patterns, each stencil may be edited with four colors. The camouflage pattern may also be edited based on wear and tear, ranging from a fresh pattern to a worn pattern. It can also be customized to range from being dull to bright. 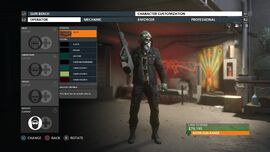 Each subfaction within Law Enforcement and Criminals feature four customization slots for each Class, with sixteen slots available in total. The amount of camouflage customization is dependent on the camouflage that is currently equipped to the agent. For example, the Default camouflage only has three color customization slots while the Stealth camouflage has seven slots. All camouflage patterns are linked for that class in that subfaction, meaning a custom camouflage pattern for a SWAT Mechanic will not carry over to a Undercover Mechanic. When pertaining to all patterns in the same subfaction for the same class, this also means that a heavily customized Stealth camouflage will carry the first three color slots over to the Default pattern.

The custom camouflage pattern will appear in-game as "Custom" in the player customization menu and must be selected in-game to equip. It should be noted that it can offer advantages on maps as the camouflage can be customized to blend into the surroundings. An example would be having an all black pattern on a night map to better avoid enemies.

The Gun Range is an indoor shooting range inside the same workshop as the Gun Bench that allows players to test customized weapons in a manner similar to the Test Range from Battlefield 4. Each booth features a target fixed at a set range with booths on the left side having the closet targets and booths on the right side having the furthest. Each booth also features the old logo for Visceral Games on an interactive pad that will recall the target for that booth when pressed to allow players to see their firing accuracy.

The range also features an Ammunition Locker and a light switch to turn the entire range dark to practice firing in the dark.

Targets as seen on the range

A target up close after being recalled

The Ammunition Locker and light switch

The Shooting Range as seen with the lights switched off