Guns of August is a Codex Entry featured in Battlefield 1. It is unlocked by winning one game of Conquest.

THE GUNS OF AUGUST - THE START OF WORLD WAR 1[] 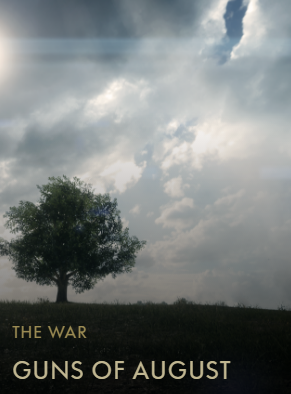 Europe before The Great War is often described as tranquil about peaceful, but in decades before there had been Balkan wars, the Russo-Japanese war, terrorism, assassinations and increasing demands for civil rights and self-governance throughout the empires.

And so when Austrian Archduke Franz Ferdinand was shot, at first it barely caused a ripple. In Britain and France it was seen as just another political assassination in a far-off corner of Europe where things like that happened. It was certainly not a reason to go to war. But all of the nations who went to war did have other reasons, and as it turned out, that assassination was the perfect foil to make the dominoes fall.

Austria-Hungary wanted an empire to the Mediterranean. Russia wanted influence in the Balkans. Germany feared Russian economic expansion, and also wanted a larger global empire. France wanted back the lands it had lost to Prussia. Britain wanted to curb German expansion, especially naval and colonial expansion, while preserving its own worldwide empire.

Some leaders also saw war as a way to silence the protests and boost nationalism. But it wasn't just political. War was big business. Someone would have to supply the troops. Produce weapons, ammunition, and uniforms. Those someones would make fortunes. It's no secret that the war created tens of thousands of millionaires, and it's no secret either that many business leaders urged their governments to war in 1914.