The H.C.A.R. (Heavy Counter Assault Rifle) is a modernized semi-automatic version of the World War II BAR 1918 developed by Ohio Ordnance Works, Inc. The weapon is lightweight, with a reduction almost 8 pounds compared to the BAR, and is completely customizable, but still fires the BAR's .30-06 Springfield round (7.62x63mm) and uses the same Browning 3-position gas system. The H.C.A.R. uses a pistol grip, adjustable stock, multiple Picatinny-type accessory rails and can feed from a 30-round detachable magazine, compared to the BAR's 20 round magazine.

0.7
0.2 ┴ 0.2
"The HCAR is a modernized version of the WWII-era BAR. Firing a high-power .30-06 round, the HCAR has a lot of stopping power, but this comes with heavy recoil to manage in full-automatic firing."

The HCAR is a weapon featured in Battlefield Hardline.

The HCAR is unlocked after the Hot Shot Case file is completed alongside the SCAR-H. The HCAR is the second available battle rifle in the campaign. It has a rate of fire of 450 rounds per minute and is shown with a 20-round BAR magazine unlike its multiplayer counterpart.

The HCAR is a purchasable Battle Rifle for the Law Enforcement Enforcer. It fires the .30-06 round and deals heavy damage, but it has a large amount of recoil when fired fully-automatic. Compared to the SCAR-H, the HCAR has a slower time to kill at the same ranges, but has ten extra rounds in its magazine and swifter reloads.

The HCAR has a high first shot multiplier as well as high vertical recoil, and as such benefits from the addition of an Angled Grip for accurate long range shooting. Conversely, a Stubby Grip and Compensator can help improve recoil manageability in close quarters. 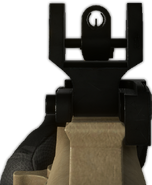 Sprinting with the HCAR equipped with an M145

Using an ACOG Sight with the HCAR on Bank Job
Community content is available under CC-BY-SA unless otherwise noted.
Advertisement