The "HK51" is blanket term for a compact variant of the Heckler & Koch G3 rifle. They are not officially made by Heckler & Koch, and are generally G3 rifles converted with short barrels and collapsible stocks, making them more maneuverable in close quarters. It fires the powerful 7.62x51mm NATO round, giving it high firepower, but the rifle's short length gives it high recoil and limited range.

42 + 21 rounds (SP)
"A cut-down G3A3 which has been modified to take MP5 furniture and accessories. Smaller size makes this weapon maneuverable in tight quarters, but recoil is harder to control."

The HK51 is a purchasable Battle Rifle for the Criminal Enforcer kit. It is a downsized G3A3, and has high maneuverability in close quarters, but its heavy recoil can be difficult to control due its small size. A Stock can be attached to reduce the weapon's spread. The Muzzle Brake, Compensator and Heavy Barrel are also well-suited to this weapon.

Unique amongst the battle rifles. The HK51'S fire mode may be changed to a burst mode, Which has the gun fire two quick bullets similarly to the AN-94 This aids in general spread and control of the weapon, Making it much easier to manage.

The HK51 in first person. 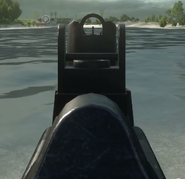 Reloading.
Add a photo to this gallery

Retrieved from "https://battlefield.fandom.com/wiki/HK51?oldid=374171"
Community content is available under CC-BY-SA unless otherwise noted.