The High Mobility Multipurpose Wheeled Vehicle (HMMWV), informally known as the Humvee or Hummer, is a military 4WD motor vehicle created by AM General. Primarily used by the United States military, it is also used by a number of other countries and organizations and in civilian adaptations.

The HMMWV is the light armored vehicle featured in Battlefield 2 for of United States Marine Corps, United States Navy SEALs, Special Air Service, and European Union. Its MEC/Spetsnaz/Rebel Forces and PLA counterparts are the GAZ-3937 and the NJ 2046, respectively.

Its main purpose is to provide a better-protected troop transportation platform compard to the DPV/FAV, with some mobility and agility trade-off in return, and can hold up to 4 players (1 driver, 1 gunner, 2 passengers). Unlike its counterparts, the passengers in the rear are arranged in a straight, vertical line while both of its counterparts have a horizontal, side-by-side arrangement. This passenger layout makes it easier for enemies to kill both passengers at the same time from the rear of the vehicle compared to that of its counterparts, however, this is compensated by its size: the HMMWV is the smallest of the 3 medium transport, being shorter, narrower, and lower than the Vodnik, and about the same length, shorter, but slightly wider than the NJ 2046. In terms of armament, it is also the only vehicle of its class equipped with AT weapon, with some HMMWVs in Battlefield 2: Special Forces may have the M2HB Browning replaced with an M220 BGM-71 TOW ATGM launcher, utilized by the US Navy SEALs and British SAS. Its speed and armor statistics are identical to its counterparts, however.

The HUD of the gunner on a mounted M2 Browning. 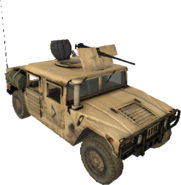 Another model of the HMMWV.

The HMMWV is a light armored vehicle featured in Battlefield 2: Modern Combat for both the NATO and the United States Marine Corps.

The HMMWV appears in most of the levels of the campaign, with some of them allowing the player to drive one.

The HMMWV appears as one of two main light vehicles for the USMC, the other being the Desert Patrol Vehicle. It counterparts are the EU Eagle MTV and the MEC Akrep.

The HMMWV in Battlefield 2: Modern Combat.

A HMMWV and a golf cart.

A HMMWV with desert camouflage.

The HMMWV is a vehicle featured in Battlefield: Bad Company.

The HMMWV is used by the US Army as their primary light transport vehicle. It appears in 3 missions: Welcome to Bad Company, Acta Non Verba, and Crossing Over, for the last mission mentioned, it only appears in cutscene. Technically, it is the first vehicle available for the player to use in the singleplayer campaign, in Welcome to Bad Company, where the player is tasked with neutralizing the Russian artillery battery on the hill after they have finished the tutorial, and basically available to the player for that whole level. It is available again in Acta Non Verba, where after the player has defended the mobility-killed Abrams in the city square, a HMMWV is provided for the player to drive to the port. It is armed with an XM312 .50 HMG, which is effective against infantry, light vehicles, and helicopters.

The HMMWV is used by the US Army in Gold Rush mode and Conquest.

It has room for 4 players: 1 driver, 1 gunner, 1 player in the back and 1 passenger. The HMMWV's MG has a very limited turning speed, so it can be easily flanked if used as a stationary weapon, but the turret is also very accurate, powerful and completely void of recoil, making it suitable for medium distances.

The passenger in the back has their infantry weapons to their disposal, so they can help in shooting targets, although this help is limited, and, if they're using a Support kit, they can also constantly repair the HMMWV if it's damaged.

The HMMWV with woodland camouflage.

"High Mobility Multipurpose Wheeled Vehicle with 4WD capability it is used as a personnel and light transport truck by all branches of the U.S. Military. It seats 4 and is armed with a .50 caliber Heavy Machine Gun (HMG) in a 360 degree weapons ring mount."

The HMMWV is a vehicle featured in Battlefield: Bad Company 2.

The HMMWV is seen with woodland camouflage, and equipped with either an XM312 or a BGM-71 TOW.

The HMMWV 4WD is exactly the same as the one in the last game, except now it can be affected by Vehicle Specializations. It can be found with an XM312 on all modes and with a TOW on Onslaught.

The HMMWV is a vehicle featured in Battlefield Play4Free. The Humvee has a relatively fast speed, and is armed with an HMG (M2 Browning). It has average health for a light vehicle.

Desert Camouflage
"Serving in every division of the US Armed Forces for 20 years, increased armor was added as a response to urban threats."

The M1114 HMMWV is a vehicle featured in Battlefield 3.

The HMMWV was first seen in a few gameplay trailers. In the Fault Line Trailer, M1114 HMMWVs can be seen as idle scenery, while in the mission, Operation Guillotine, the Marine unit Haymaker, along with the player rides in a M1114 HMMWV with a CROWS (Common Remotely Operated Weapon Station) for a brief moment.

The HMMWV appears in the missions Operation Exodus and Exfiltration. In the former, Snake 6-6 have to defend a group of HMMWVs from PLR infantry as they try to assault the USMC defensive line. In the latter, the duo use the .50 cal Browning M2 on the HMMWVs as they extract Hamid Al-Zakir.

The HMMWV has a remotely operated .50 cal M2 Browning machine gun with zoom optics, and is present on the maps Caspian Border, Kharg Island, Grand Bazaar, Damavand Peak, and Tehran Highway. Two other passengers can ride inside, but cannot use their equipment.

The HMMWV is lightly armored, but is susceptible to any form of explosion. The gunner's machine gun deals a maximum of 20 damage trailing down to a minimum of 15.6 damage; this means that it will always require between 5 and 7 shots to drop an enemy. It has a very low tolerance for damage, being disabled at 77% health. Grenades can blow doors open, or even kill occupants from beneath. Explosive ammunition can inflict damage if shot through the windows. However, the windows are completely resistant to small arms fire.

When fully repaired, any detached armor or open doors are resealed.

A heavily modified version, called the Phoenix, appears in Battlefield 3: Aftermath. The Phoenix acts as a light transport with an attached grenade launcher that has been fitted at the back in conjunction with the existing machine gun on top that will carry troops.

An anti-air version, called the HMMWV ASRAD, appears in Battlefield 3: End Game. The HMMWV ASRAD has an anti-air missile launcher that can fire missiles that lock-on to air vehicles, or are dumb-fired while not on a lock-on.

Side render of the vehicle.

The M1114 is a vehicle featured in Battlefield 2042. Available exclusively in the Battlefield Portal, it functions in a similar manner to past installments. It is available on Bad Company 2 and Battefield 3 maps.