Battlefield Wiki
Register
Don't have an account?
Sign In
Advertisement
in: Standard, Construction, Features of Battlefield 1942,
and 11 more

The HUD, or Heads-Up Display, is a feature present in all installments of the Battlefield Series. The HUD contains all the necessary information that the player requires for combat, including ammunition count, minimaps and objective icons, etc. The design of the display has changed much since the release of Battlefield 1942, with several different designs being shown, and with the inclusion of the hardcore game option in later installments. The amount of information shown has also increased. 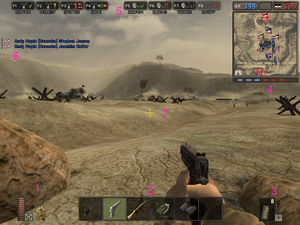 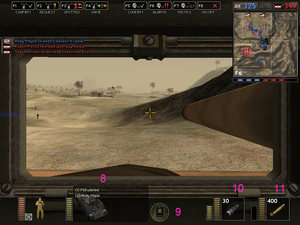 6. Killfeed, in order, killer[means of killing]victim; newsfeed, displaying events in game such as calling an artillery strike, a team capturing a conquest point and team commands

7. Crosshair, Note: Indication for damage is marked with an x overlaying the +

8. Vehicle health, list of players in their respective seats

9. Positioning of tank parts as the barrel rotates freely from the chassis

The HUD in Battlefield Vietnam is similar to Battlefield 1942's, but with some minor differences. Near the health meter is a silhouette of the character class and the faction you are playing as and near the ammunition counter is a silhouette of the weapons you are currently using. The minimap is now diamond-shaped unlike the square shape of Battlefield 1942's minimap. Near the minimap is the number of tickets each team has and on top of each team's icon is the flags they hold.

In this installment, the HUD receives some changes; the minimap becomes circular and the user may edit his or her HUD as the wish.

Battlefield 2142 is similar to Battlefield 2, but with minor aesthetical changes and Active Defense System.

Majority of the HUD text consists of the Eurostile typeface.

In Battlefield 3, the HUD design follows the general style of the game, with a more minimalist feel to it than previous games according to game journalists. The HUD displays all the permanent information, such as ticket counters, objective icons, both above the minimap and above the objectives themselves, ammunition count, squad status, health, and the killfeed. Parts of the HUD that are temporarily shown, in the form of pop-up boxes, when pointing the cursor at a specific object to interact with.

Servers can remove parts of the HUD, or the entire HUD, increasing the challenge as players must mentally monitor their status. Players can also use the console command UI.DrawEnable to hide the entire HUD. The majority of the HUD text consists of the Purista typeface.

The HUD in Battlefield 4 remains largely the same as its predecessor, albeit altered with a slightly different color scheme. The HUD uses a modified Purista typeface which includes slashed zero.