Halberstadt CL.II is a Codex Entry featured in Battlefield 1. Detailing information about the Halberstadt CL.II, it is unlocked by obtaining five kills with attack planes. 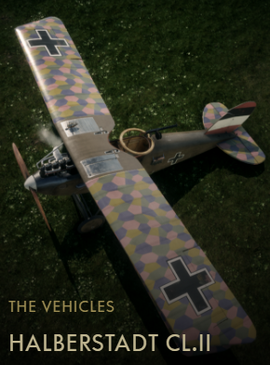 With excellent climb rate and maneuverability, the Halberstadt CL.II was regarded by many of its crews as performing almost as well as single-engine fighters. It was used both as a ground attack plane and as a fighter escort. The rear machine gun was mounted on an elevated gun ring, allowing it to fire downwards towards targets on the ground.

The CL.IIs were successfully deployed in large numbers for close air support during the German Spring Offensives in 1918. Around 900 machines were built and it remained in service throughout the war.

Retrieved from "https://battlefield.fandom.com/wiki/Halberstadt_CL.II_(Codex_Entry)?oldid=343280"
Community content is available under CC-BY-SA unless otherwise noted.