Hand Grenades is a Codex Entry featured in Battlefield 1. It is unlocked upon obtaining 10 kills with Grenades. 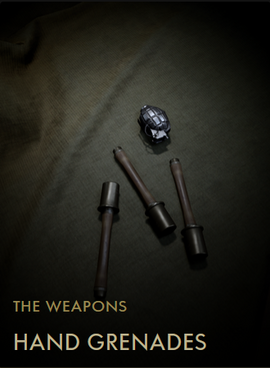 Grenades came in many shapes and forms: disc, potato-shaped, cylinders attached to sticks. Some were even fired from rifles, but the hand grenade became the most popular version. Special units of Grenadiers were formed during the war and would be responsible for quickly racing down trenches and dugout and wreaking havoc. Grenades proved extremely effective for clearing out pillboxes and strongpoints. Hand grenades which contained poisonous gas were also developed.

Retrieved from "https://battlefield.fandom.com/wiki/Hand_Grenades_(Codex_Entry)?oldid=343172"
Community content is available under CC-BY-SA unless otherwise noted.