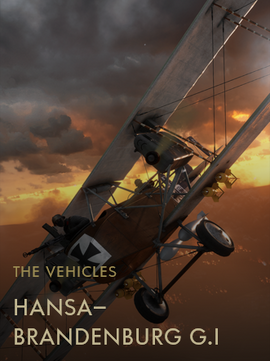 The Hansa-Brandenburg G.I was an Austro-Hungarian bomber airplane used on the Italian Front. It had a crew of three- a bombardier, a pilot, and a rear gunner. Two water-cooled inline piston engines that were attached to the fuselage gave it a maximum speed of 133 km/ 82 mi per hour. Austro-Hungarian high command ordered these aircrafts built to retaliate against the Italian bombers that appeared in force over the Isonzo River frontlines in late 1915, but they never saw much action, as construction was delayed by a lawsuit, and they were soon replaced by superior German aircraft.

Retrieved from "https://battlefield.fandom.com/wiki/Hansa-Brandenburg_G.I_(Codex_Entry)?oldid=343268"
Community content is available under CC-BY-SA unless otherwise noted.