Harsh Climate is a Codex Entry featured in Battlefield 1, introduced in the Battlefield 1: In the Name of the Tsar expansion. It is unlocked upon winning a round on Łupków Pass. 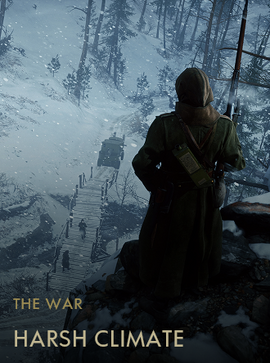 On the Eastern Front, winter was never far away. Blinding snowstorms made maneuvers impossible and many soldiers got lost or froze to death in the night. The hard work of constantly shoveling roads and trenches free of snow left the soldiers exhausted and the overexertion in ice-cold winds and temperatures below -20F (-28C) made them vulnerable to frostbite and lung ailments. Food supplies and rifle bolts froze solid, shells did not explode in the deep snow, and dead bodies couldn't be buried in the frozen ground. Wounded men attracted hungry wolves that preyed on the weak and the weary. Only soldiers accustomed to such a climate and specially trained to fight with winter gear would be able to fight effectively at all. The spring thaw was another big challenge. Marshes and swamps were flooded, lakes and rivers burst their banks as the snows melted, and disease grew rampant. There were times when more soldiers died from the winter cold or from the springtime diseases than from actual combat.

Retrieved from "https://battlefield.fandom.com/wiki/Harsh_Climate_(Codex_Entry)?oldid=343352"
Community content is available under CC-BY-SA unless otherwise noted.