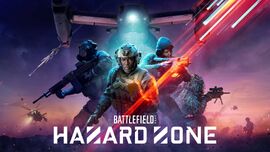 Hazard Zone is a gamemode featured in Battlefield 2042 as a "high-stakes" multiplayer experience for up to 8 squads (6 for last-gen) of 4 players. The mode challenges squads of players to retrieve objectives known as Data Drives dropped into the battlefield via capsule from low Earth orbiting satellites. Complicating matters are the presence of Occupying Forces with their own objectives, and rival squads vying for the same intel.

Battles take place in the same maps used for "All Out Warfare". Each squad is equipped with an Intel Scanner used to locate available Data Drives, and the approximate location of those held by enemy squads. After retrieving drives, a single MV-38 Condor arrives to extract the first squad it makes contact with. Additional satellites will fall in the zone during battle, providing more data drives for retrieval. A second V-38 will perform final extraction before weather turns against them. Unlike other gamemodes, players have only a single reinforcement ticket for themselves if killed, with limited opportunities for revival.

Laptop Uplinks are scattered throughout the map, providing its user with additional help:

Successfully completing matches will reward players with progression toward unique Player Cards or Tags. Special Player Cards are also unlocked by performing consecutive extractions with the same Specialist to earn an Extraction Streaks.

Weapons and gadgets used in the gamemode are purchased through the in-game currency, Dark Market Credits (DMC). DMC is rewarded by successfully extracting drives or killing enemy players or bots. Players may only purchase the weapons and gadgets they have unlocked in the All-Out Warfare mode for use in Hazard Zone. Weapon customization may only be done prior to the start of a match. Purchased weapons and gadgets do not carry over to subsequent rounds.