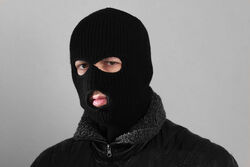 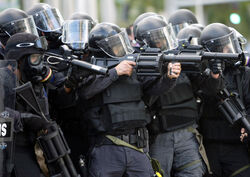 Headgear is the name given to any element of clothing which is worn on one's head. It may serve a variety of purposes such as protection, decoration or fashion, distinction, or even the concealment of one's identity.

Masks are objects normally worn on the face, typically for protection, disguise, performance or entertainment. In the manner of disguise, it allows the wearer to assume a role or perform a task without being identified by others. Criminals have been known to wear masks as a means to conceal their face from victims and Law Enforcement.

A Helmet is a form of protective gear worn to protect the head from injuries. They are typically made with a form of resin or plastic which may be reinforced with fibers such as aramids. In the case of Law Enforcement, Helmets may feature protective elements attached to them, such as a face visors or goggles or a face cage, or an ear cage or ear plugs and other forms of protective headgear, and a communications system. They are often used by riot police as well as SWAT officers.

Battlefield Hardline introduces headgear as an available gadget which feature their own respective bonuses and abilities. Aside from the T-Rex mask, masks are exclusive to Criminals for use. Likewise, helmets may only be used by Law Enforcement. While only three pieces of headgear were available in Battlefield Hardline upon release, the first expansion Criminal Activity added six more headgear as well as new variants of the existing Wolf and T-Rex masks.[1] The FR Mask was added with the release of the Robbery expansion as well as the option to unlock all masks upon entering Legendary Status.