Heavy Metal is a map featured in Battlefield: Bad Company 2 that was added in VIP Map Pack 7. It is the largest map in the game, even dwarfing Atacama Desert. It features Conquest and Squad Deathmatch game types. The map features many vehicles, including for the first time in the Bad Company series both attack helicopters and transport helicopters in the same map, anti-air emplacements to counter said helicopters and a multitude of ground vehicles for covering the vast distances over the map.

A US Assault Group moves to support a break-through action against Russian Forces in the Chilean mountains. The Russians are attempting to overrun the US positions with a surprise counter attack in order to push them out of the valley. Armored and airborne assets in the open landscape makes large-scale vehicle warfare a high probability. Sniper and RPG teams have also been spotted in theater. 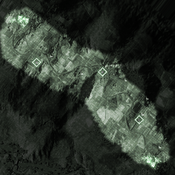 The three bases Alpha, Bravo, and Charlie, are named based on their purpose in the single player. Their names are misleading and do not have anything to do with their single player counterparts.

As the Russians, you begin on the north side of the map. Available immediately are the Mi-28 Havoc on a pad and Mi-24 Hind in a grass clearing. Two T-90 MBT's spawn on the left side. There is also a ZU-23 Anti-aircraft gun and 2 Kornet Launchers for taking down enemy helicopters and tanks that get too close.

Located just outside RU deployment. Spawns an MBT, a CAV and a Stationary AT emplacement when captured. This flag, like Flag C, is very rarely fought over, as if the Americans try to capture the base, Russian flanking moves and counter-attacks from their deployment are commonly too overpowering for the limited forces that a US force at the flag can bring to bear, due to the Russians being able to bring up fresh tanks and helicopters from their base, while many of the US vehicles attacking the base may not have been repaired since previous combats. This base is 1 kilometer from the US deployment.

Located in the center. Spawns 2 MBTs and an anti-air cannon belonging to whichever faction holds it, as well as the UAV station and a CAV. This base tends to be where most action happens since both sides will usually clash here and there are many benefits to holding it. The team that controls this base will gain armor, possible reinforcements, and air superiority making it a key strategic point on the map. There are also two hills overlooking Bravo which are ideal spots for Recon players, due to their ghillie-suits matching the colors of the foliage and the hill-side. However they are very vulnerable to enemy fire once spotted. Common sniper battles are fought for control of these two hills, with the winners being able to call in mortar strikes on all three flags on the map. The close nature of the buildings in the village allow a defending side to easily flank enemy vehicles and infantry, while, in the same sense, an attacking force can use the lack of clear firing lines to creep up on defenders and eliminate them quickly.

Located just outside the US deployment. Spawns an MBT, a CAV and a Stationary AT emplacement. This flag, like Flag A, is very rarely fought over, as if the Russians try to capture the base, US flanking moves and counter-attacks from the US deployment are commonly too overpowering, due to the US being able to bring up fresh tanks and helicopters, while many of the Russian vehicles attacking the base may not have been repaired since previous combats. The layout of the buildings gives an advantage to any defending force, as the close confines of the area allow the defenders to flank tanks and cause havoc among an attacking force.

Located at the edge of the mountain town by the river. The U.S. deployment has a Black Hawk and an Apache; the Black Hawk rests on a clearing of grass while the Apache is on a helicopter pad. 2 Abrams and a CAV also spawn at this base, as well as 2 TOW Launchers near the entrance and the VADS in the rear. 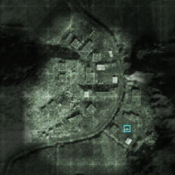 Located at the middle of the map. Like all other Squad Deathmatch maps, it gives an M3A3 Bradley. 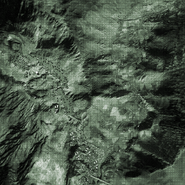