Hell on Rails is a Codex Entry featured in Battlefield 1. It is unlocked upon destroying part of an enemy Behemoth. It describes the use of Armored Trains during World War I. 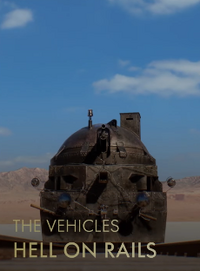 One of the most important factors in every war is the speed at which the fighting force can be deployed against the enemy. In the later 19th century, the train became the most valuable means of transportation in the American Civil War and the Franco-Prussian War, as it could quickly move horse, guns, and soldiers. A dense system of railways and train stations allow armies to hastily deploy their troops, gaining the advantage over a slower enemy. And from Verdun and Galicia to the Piave and Palestine, armored trains in World War One would quickly move high-caliber artillery towards the front to provide heavy artillery support or carry supplies in the safety of their iron-clad hulls. Powered by coal or petroleum, armored trains of the War could fire large 6-inch naval guns while at the same time providing enough space for soldiers and their equipment. Machine gun emplacements could engage approaching infantry as well as incoming bombers, which saw the trains as valuable targets. Armored trains were, however, vulnerable to mines or other explosives that could sabotage the tracks.

Retrieved from "https://battlefield.fandom.com/wiki/Hell_on_Rails_(Codex_Entry)?oldid=343276"
Community content is available under CC-BY-SA unless otherwise noted.