The Standschütze Hellriegel 1915 is a water-cooled submachine gun produced in very limited numbers for the Austro-Hungarian reserves (Standschütze) during World War I, by a designer identified only as "Hellriegel". A highly obscure weapon, no complete examples are known to still exist, and little official documentation remains. As a result, its operating mechanisms, exact production numbers and development history are all based on speculation. However, photographic evidence exists of it in live-fire tests which are dated October 1915, making it one of the earliest submachine gun designs in history.[1]

The weapon could be fed from either box magazines or chute-fed. Contrary to its in-game depiction, the drum magazine developed for the Hellriegel could not be attached to the weapon itself; it was designed to be carried by another soldier. It is unknown why the weapon did not progress beyond the prototype stage.

This item has a Codex entry: Hellriegel 1915

"An Austrian heavy SMG equipped with a high-capacity drum magazine and water-cooled barrel."

The Hellriegel 1915 is a weapon featured in Battlefield 1. It was first seen during the Battlefield 1 Official Gamescom Gameplay Trailer.

A Hellriegel 1915 Storm variant, equipped with a Buckhorn Sight, assumedly reduced recoil and increased zoom, can also be found in a crate in the War Story, Through Mud and Blood.

The Hellriegel 1915 is unlocked upon reaching rank 10 with the Assault kit. The weapon's high magazine capacity of 60 rounds makes it extremely effective against enemies in close quarters compared to other submachine guns and LMGs. Despite this, its relatively moderate recoil makes it somewhat difficult to engage enemies at longer ranges unless controlled shots are fired. It also overheats after 40 bullets straight.

The Hellriegel only comes with 120 rounds (including the 60 in the starting magazine), meaning that running out of ammunition is a common problem. Playing near Support teammates that often drop ammo crates or pouches alleviates this problem.

Like the 12g Automatic, a semi-automatic shotgun that the Assault kit also wields, the Hellriegel 1915 is unable to equip a Bayonet, thus it is unable to perform a Bayonet Charge.

A Defensive variant is equipped with a bipod and a 120 round magazine had been added to the CTE. It is unlocked by obtaining 300 kills with the Factory variant and performing 25 kills with the Anti-Tank Mines.

The Standsch during the Gamescom Trailer 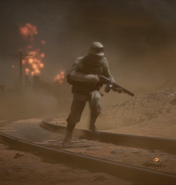 Retrieved from "https://battlefield.fandom.com/wiki/Hellriegel_1915?oldid=311315"
Community content is available under CC-BY-SA unless otherwise noted.