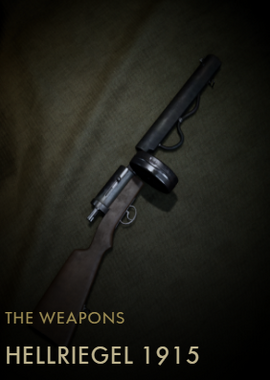 Originating from Austria-Hungary and even though the term submachine gun had not yet been coined in 1915 this beast was belt-fed from a German snail magazine, firing 9mm rounds and had a water cooling jacket. Archives indicate that this weapon was named after someone called Hellriegel.

Retrieved from "https://battlefield.fandom.com/wiki/Hellriegel_1915_(Codex_Entry)?oldid=343119"
Community content is available under CC-BY-SA unless otherwise noted.