Holes Through Steel is a Codex Entry featured in Battlefield 1. It is unlocked upon obtaining 10 kills with the Tank Hunter Elite Class. 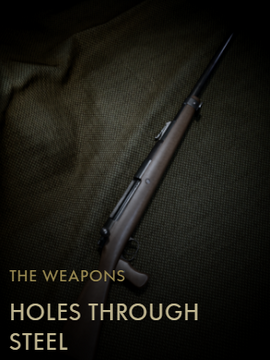 The M1918 is the first rifle designed for the sole purpose of destroying armored targets. At over 169cm this monstrous German weapons would stand almost the same height as a soldier. It was extremely heavy (17Kg/37.7lb) and peerless in its ballistic capabilities. The TankGewehr fired an extremely powerful 13.2mm round that could penetrate even the toughest tank armor of the era. The M1918 was so bulky and so powerful that it had to be fired from a static position.

Retrieved from "https://battlefield.fandom.com/wiki/Holes_Through_Steel_(Codex_Entry)?oldid=343182"
Community content is available under CC-BY-SA unless otherwise noted.