The horse is a mammal that has been used in warfare for over 5000 years. Used for mounted reconnaissance, cavalry charges, raiding, communication, or supply work, the horse (as well as mules and donkeys) have played a crucial role in providing support to armies in the field. The effectiveness of horses in battle was revolutionized by improvements in technology, including the invention of the saddle, the stirrup, and later, the horse collar.

Horse cavalry began to be phased out after World War I in favor of tank warfare, though a few horse cavalry units were still used into World War II, especially as scouts. By the end of World War II, horses were seldom seen in battle. Today, formal battle ready horse cavalry units have almost disappeared, except by paramilitary or unconventional fighters, with the United States Army Special Forces using horses in battle during the 2001 invasion of Afghanistan. Many nations still maintain small units of mounted riders for patrol and reconnaissance, and military horse units are also used for ceremonial and educational purposes.[1]

The Horse is an available means of transportation featured in Battlefield 1. Players will be capable of using melee weapons or sidearms when riding a Horse and can also customize it to a certain degree. Players who spawn on horses are switched to the Cavalry kit.

Any other player that mounts the horse afterwards will use the equipment carried by the horse, but will resume using their original kit upon dismounting. Mounting a neutral horse will not change the player or horse's appearance.

An exclusive skin is available for the Horse in the Lawrence of Arabia Pack.

The horse is a quick mover around the battlefield, capable of trampling infantry on its own. Unusual for other vehicles, the horse will negotiate terrain as best it can, while avoiding situations where it may harm itself. It can be commanded to sprint, which also allows the rider to assume a smaller profile. Though it cannot be commanded to jump, the horse will jump over obstacles when able.

It cannot be commanded to jump off high cliffs or into deep water, but will leap over short obstacles. Though it can travel through less-deep bodies of water, it does so at a significantly reduced pace.

A unique control scheme is used for horse movement. Like a "twin-stick shooter", the WASD movement keys or left analog stick directs the horse to move in that relative direction, instead of steering left/right as with motor vehicles. This allows the player to look/aim in any direction while independently moving the horse. Shooting to the rear is accomplished by moving the mouse or right analog stick to aim to the rear, while simultaneously circling the movement keys or left analog stick towards the ↓ position.

The horse is controlled entirely from third-person perspective. Pressing the Camera button switches the view to the other side of the horse.

Holsters and packs on the horse's saddle carry equipment for the rider to use while in motion. Riders have access to a rifle carbine, such as the Russian 1895, as their primary weapon in addition to a Cavalry Sword as their secondary weapon. The rifle allows players to shoot while on horseback, but due to the third-person camera lock while on the horse, they cannot use their sights while doing so. Still, the rifle can be used with much more accuracy than when hip-fired on foot. The saber allows riders to slash down infantry on either side of the horse while in motion. Riders can also attack vehicles or disperse infantry using two light anti-tank grenades.

Additionally, the kit has access to Ammo and Bandage Pouches that can be thrown while riding and heal/resupply themselves by throwing the pouches in front of the horse. The gadgets automatically replenish while mounted, as it does on other vehicles.

The Battlefield 1: In the Name of the Tsar DLC adds the Cavalry Lance as an alternate mounted weapon.

Horses are capable of trampling enemy infantry and jumping over many of the ground vehicles (including heavy tanks).

The horse has at least four times the health of a soldier, but can still be harmed and killed using similar methods. Riders can be killed by forced dismount if their horse is killed. The high profile of the rider makes them a highly visible target. Riders are especially vulnerable at low speed, as the horse does not maneouver well. Horses also take a while to recover if presented with an impassable obstacle such as a rocky outcrop.

As a living being, horses also take damage from gas and fire (as will the rider). Collisions with vehicles can also cause damage, but rarely kill a horse in one blow. Horses do set off anti-tank mines when passing over them, just the same as motorized vehicles. Anti-tank grenades do appear to detonate on contact with horses, as they do with vehicles. Direct impacts from cannon-type weapons, including tank guns, field guns and AT Rocket shells, are very damaging to horses and may even one-shot a full health animal.

There are three horse skins available for all players; the 'Bay' (dark brown) and 'Dun' (light brown) horses are pre unlocked, the skin 'White Grey' is usable to the player after reaching rank 10 with the cavalry kit.

The 'Smokey Black' skin is available as part of the Lawrence of Arabia pack.

Left side of a Horse used by the British Empire

Aiming with the Russian 1895 Cavalry

Charging with the Cavalry Lance

Rearing up after a quick stop

Horse with a gas mask and protective coat, seen on Caporetto and Passchendaele

Zara riding a horse into battle 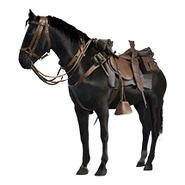 3D render of the Horse
Add a photo to this gallery

Retrieved from "https://battlefield.fandom.com/wiki/Horse?oldid=358150"
Community content is available under CC-BY-SA unless otherwise noted.