Horses and Pigeons is a Codex Entry featured in Battlefield 1. It is unlocked by obtaining a savior bonus with a squad mate. 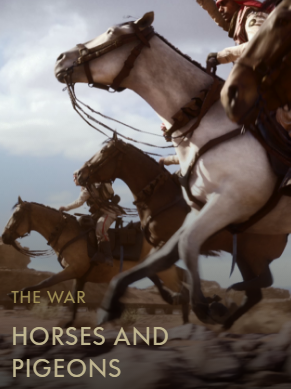 The war saw a large amount of motorization and modern mechanization, but it was still mainly run by horsepower. Field guns, howitzers, and mortars were still towed by teams of horses, while mules and donkeys carried water, food, and ammunition. Camels carried wounded soldiers through the hot desert or charged into battle. Tens of thousands of dogs carried messages, dragged cart laden with supplies, or brought medical help to the wounded. Slugs warned soldiers of incoming gas attacks, cats would hunt rats and other vermin in the trenches, and Dobermans stood guard outside the tents of bunkers. Smaller dogs carried telephone wires or communication equipment through no man's land. Pigeons were highly valued as messengers in the field and were even sent out of flying planes or moving tanks to carry important messages back to command posts. When communication devices broke down or telephone lines were cut, the pigeons' instincts would still reliably guide them towards their destination. The war also saw many mascots and it wasn't all that unusual to see a lion, cub, a monkey, or even a small kangaroo following the soldiers into the trenches..

Retrieved from "https://battlefield.fandom.com/wiki/Horses_and_Pigeons_(Codex_Entry)?oldid=343316"
Community content is available under CC-BY-SA unless otherwise noted.