"The criminals are trying to steal a list of marked cars while the cops are trying to repossess them. It’s pedal to the metal action as you jump into different rides to catch up with the enemy. And don’t forget you can bring a friend riding shotgun to take them down." 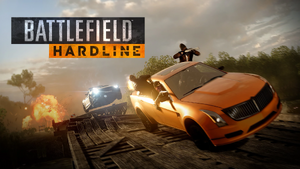 Hotwire is a gamemode featured in Battlefield Hardline.

The objective of the Criminals is to steal five marked vehicles and drive them across the map in order to obtain points. Law Enforcement on the other hand must either stop the criminals or procure the marked vehicles themselves and keep them in control until time or tickets run out.

Marked vehicles have a bright orange paint color scheme, with the exception of the Fuel Tanker. They function in the exact same manner as their unmarked counterparts, but does not feature Battle Pickups, Countermeasures or other upgrades. They are, however, affected by the Stunt Driver upgrade. Hotwire is a great way to obtain large sums in money in short periods of time due to the amount of experience earned while driving marked vehicles.

Avoiding death or damage to a marked vehicle and driving them as fast as possible is crucial as it is extremely common for enemy players to plant explosives or launch shouldered-fired missiles at vehicles. Vehicle can be damaged from any sort of gun fire, making a Repair Tool ideal. Sabotage, Laser Tripmines or Breaching Charges can be useful for destroying vehicles as soon as an enemy enters them, while RPG-7, SMAW or Grenade Launchers are useful against vehicles on the move. Heavy weapons like Battle Rifles and Shotguns can also be highly effective.

Not all maps support Hotwire as they all are too small and/or too closed-in to facilitate the vehicle gameplay this mode relies on.

Retrieved from "https://battlefield.fandom.com/wiki/Hotwire?oldid=344575"
Community content is available under CC-BY-SA unless otherwise noted.