Howdah Pistol is a Codex Entry featured in Battlefield 1. It is unlocked upon obtaining ten kills with the Howdah Pistol. 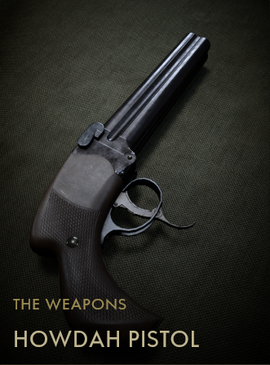 The Howdah-type pistols were large-caliber, breech-loaded handguns, typically with two or four barrels, that from the early 19th century were initially used for defense against wild animals in remote areas of the British Empire like India and Africa.

The term comes from the howdah, which is a large hunting platform on the back of an elephant. The earliest Howdah pistols were variations of sawn-off rifles, but soon British firearms makers started manufacturing specially designed Howdah pistols, which had become quite common around the turn of the century.

These handguns were available in a multitude of revolver calibers of the day, up to really big bores. Compared to early revolvers, they had some advantages such as faster reloading, high reliability, easy maintenance and - due to them having a virtually airtight seal - Howdah pistols achieved much higher stopping power than a revolver using the same cartridge. Although revolvers evolved, some officers still preferred Howdah pistols as their personal defense weapons all through World War 1.

Retrieved from "https://battlefield.fandom.com/wiki/Howdah_Pistol_(Codex_Entry)?oldid=343165"
Community content is available under CC-BY-SA unless otherwise noted.