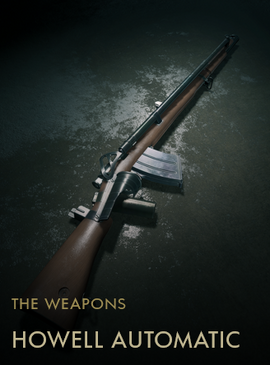 British designer N. Howell submitted his semi-automatic converstion of the SMLE Mk III to the British military circa 1915, but the weapon received little interest. Despite its crude looks, the Howell conversion performed reasonably well, utilizing a gas pistol on the right side of the barrel, and a curved plate on the end of the pistol which cycled the SMLE bolt like it would have done manually. The simple action was fairly reliable, but the fully exposed bolt mechanism was dramatic when firing. The rifle was fitted with a simple face guard and hand guard as well as a tubular pistol grip, to protect the user from the reciprocating parts. The Howell conversion used a 20-round trench magazine that had been developed for the SMLE.

Next to the standard SMLE bolt-action rifle and the Lewis light machine gun that appeared in increasing numbers, the British military saw little use for a semi-automatic rifle for most of WW1. However, during the weapon shortages of early WW2 some Howell rifles were issued to the British home guard as Anti-Aircraft rifles.

Retrieved from "https://battlefield.fandom.com/wiki/Howell_Automatic_(Codex_Entry)?oldid=343249"
Community content is available under CC-BY-SA unless otherwise noted.