For the Elite soldier in Battlefield V, see Hanna

Born in a remote village in 1985, Hannah was brought up in a strict family that required absolute obedience and for one to know their place. Hannah later traveled to America where she studied at Harvard where she later met Jin Jié. She returned to China after news reached her that her father had been diagnosed with cancer and had, at most, four months to live. It was then that her father persuaded her to join the Ministry of State Security, much to her dislike, but with her father's illness, and the fact that refusing would mean insulting him and all he stood for, she joined the MSS.

Hannah was tasked by the Ministry of State Security to detain Kovic for questioning following his meeting with Cutler at the US Consulate. Before Kovic could enter his apartment at the French Concessions in Shanghai, Hannah and other MSS operatives pulled up next to him in a black Mercedes Benz SUV and abducted him, taking him to the MSS Shanghai Headquarters, known as the "Golfball". Kovic was then taken to interrogation by Hannah, who then reviewed his previous history with him. During the interrogation, however, Kovic revealed that Hannah actually had no idea why he was in Shanghai and that she was just doing a fake interrogation to buy time. Her immediate expression thereafter proved Kovic's theory. Kovic then asked when he could go home as he had had an extremely long day, only for Hannah to reply he was going home, to Washington DC the next morning.

As Kovic was being dragged out of the building, he yelled back at Hannah, stating she had to notify the US Consulate first, only for Hannah to smile and tell him they already did and that the Consulate did not object to it. Hannah then proceeded to take Kovic back to his apartment one more time so that he could gather some personal belongings before he would be taken to the Pudong Airport and deported back to the United States.

Tombstone first meets Hannah at the Zhi Yu Towers, the squad being told earlier that she was one of the three VIPs to save, along with Kovic and her husband—a wounded man with bandages covering his head. She shows gratitude towards Tombstone for coming, and apprehension towards Pac when he tries to talk to the husband. In the botched evacuation that follows—in which Hannah's husband was shot in the abdomen—Tombstone and the VIPs parted ways, as the latter made their escape aboard a stolen helicopter from the top of the Towers.

In the prison break that followed, Hannah—who figured out that it was Dima, Recker, and Irish's doing—followed the clean-up squad (which included Bohai) tasked with eliminating the escapees. After catching them at the main gate, Hannah eliminated the squad while their attention was on Recker and the others, thus saving the trio. Irish attacks her, still enraged by Hannah's betrayal and Pac's possible death, until she finally explains herself (thanks to Dima intervening): she is a Chinese Secret Service agent tasked with protecting Jin Jié, who had been posing as Hannah's husband to protect him.

As they exit the prison and enter the cold, open-air, Hannah returned Recker's tactical binoculars back to him, much to Irish's visible surprise. Later on, Hannah revealed to Irish and Recker her story about her family and village being destroyed by Chang's men. Mortified, Irish apologizes to Hannah for not trusting her; she accepts it, reminding him of something he'd told her in Singapore: "Trust is earned".

Greenland fulfills her part of the deal, supplying a gunship plane going west towards the USS Valkyrie, which had earlier unwittingly entered the Suez Canal right in the middle of a full-on battle between the Chinese and American navies. Hannah helps Irish, jokingly telling him to aim any puke on the enemies below. Once Tombstone parachutes onto the Valkyrie, they begin to fight their way inside, eventually reuniting with Pac, Garrison, and Jin Jié.

After Jin Jié halts all hostilities, Chang orders the USS Valkyrie to be destroyed. Tombstone races for an RHIB to set off for Chang's battleship. On the way, Pac and Irish ask Hannah if she and Jié are married or not; she replies with, "I'm married to what he stands for"; and that until things change for the better, she will keep fighting.

Reaching Chang's warship, Hannah, Recker, and Irish enter its blind spot, unhindered by any further enemy movement, and had proceeded to plant charges to detonate and destroy the battleship. However, just as Tombstone grapples to safety, Hannah realizes that the charges did not detonate. Both Irish and Hannah volunteer to take Recker's last C4 charge to detonate the failed charges on the the PLAN destroyer. Recker chooses Hannah, who returns to the ship and detonates the explosives, saving the Valkyrie but likely dying in the process.[1] 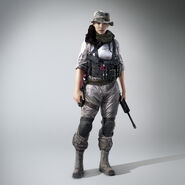 Hannah in the end of the 17-minute gameplay trailer.

Hannah character model aboard the Valkyrie.

Hannah at the start of Singapore.