IR Smoke is used by military forces to mask the movement or location of units such as infantry, tanks, aircraft or ships. The smoke provides screening even in the infrared electromagnetic region, unlike carbon emissions or fog, preventing designation from enemy weapons.

• Momentary protection against spotting, weapon lock
• Supportive screening for nearby infantry
"A smoke grenade system consisting of 6 launchers. When fired it generates a 360 degree smoke screen around the vehicle. It obscures equipment and personnel from aimed enemy fire."

The Smoke Countermeasures Package is a vehicle Specialization featured in Battlefield: Bad Company 2, obtained after acquiring 6,500 experience points with any vehicle or stationary weapon emplacement.

It is triggered by using the alternate fire button. When activated, it fires a 360-degree smokescreen around a tank, deploys flares from an attack or transport helicopter, or deploys a volley of four smoke grenades from the UAV-1.

This specialization also removes any planted tracer darts on the vehicle, removing the ability for players using the Engineer kit (or flying attack helicopters with the Alternate Weapon Package) to lock onto the vehicle until another dart has been planted.

This is an active specialization, meaning it can only be used by the driver of the vehicle, and it must be activated by user input to function. On tanks it has a cooldown of 15 seconds before it can be used again, while with helicopters the cooldown is 10 seconds. It does not function on fast attack vehicles, naval vessels, or Quad Bikes, as none of them have any defensive systems in place.

It is their primary active countermeasure, activated by the Countermeasures button; when used by the driver, the vehicle is surrounded by a thick cloud of smoke, obscuring view and thermal imaging, scrambling weapon lock, distracting guided missiles, obscuring laser designation, and preventing spotting.

Smoke is more comprehensive than the aerial equivalent, IR flares, as it distracts laser designation and protects the vehicle for as long as it stays within the smoke cloud, which lasts about five seconds.

Unguided weapons are unaffected by smoke and still have a chance of hitting the vehicle; nonetheless it is useful when retreating, obscuring the vehicle from view and making it harder to aim precisely. It also provides excellent cover for Engineers repairing the vehicle.

In all versions, a warning sound will notify players when they are being locked on and urge them to deploy countermeasures. It is best to deploy IR Smoke once the tone becomes a rapid high pitch staccato pulse, which indicates a guided missile is heading your way; the lock-on could just be a distraction.

Use of the smoke is the easiest way to avoid being killed by Javelins, and can help to some extent against Guided Missiles. Generally speaking, if a Javelin acquires a lock, firing smoke and sitting in the cloud until it dissipates can more or less nullify the missile, as it only takes two seconds after the smoke dissipates for the launchers to reload.

Against aircraft, firing smoke and going stationary means the tank is an easy target for strafing runs, so rapid course adjustments and constant movement, coupled with firing smoke is probably the best approach. 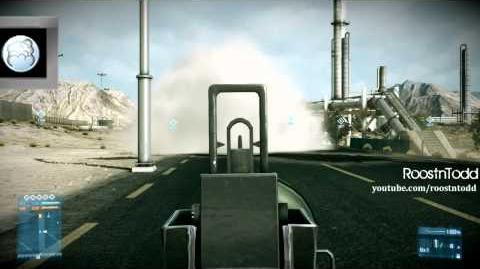 5 seconds
"Fires canisters of vaporised brass and graphite particles which interferes with the tracking of hostile missiles and Laser Designation."

The IR Smoke is a ground vehicle specialization for Battlefield 4. It is available to Main Battle Tanks, IFVs, Mobile Anti-Air Vehicles and Mobile Artillery Vehicles. It functions similarly to its Battlefield 3 counterpart only with visual differences.

The IR Smoke is the first, and default countermeasure to be unlocked and used for heavy ground vehicles. To operate consistently, the operator of a vehicle may either choose to wait for a locking or locked-and-fired warning from a hostile sources when activating the counter measure. The counter measure will launch multiple dark-grey smoke grenades into the air to create sparks and a cloud of smoke which rains around and quickly disappears from the vehicle. Any target lock or fired guided missiles will be spoofed, distracted or distracted by the IR Smoke screen. For safety, the operator can choose to remain within the smoke cloud until its effects dissipate as hostile forces are unable to acquire target lock again until the smoke clears. The IR Smoke's effect will last for up to five seconds. However, operators must bear in mind that straying too away from the smoke cloud will allow hostile forces to acquire target and missile lock again and rendering the vehicle vulnerable. The IR Smoke also has the ability to remove 3D spotting for a brief amount of time, but does not last as long or consistently as the Smoke Screen specialization.

The IR Smoke is more comprehensive than the aerial equivalent, IR Flares but maintains similarity to the ECM Jammer. Unguided weapons such as rockets or bombs will be unaffected by IR Smoke.

As with its Battlefield 3 counterpart, a warning alarm will notify the operator when they are being locked on and urge them to deploy countermeasures. For best results, it is best to deploy IR Smoke once the tone becomes a rapid high pitch staccato pulse, which indicates a munition has been fired and homing in towards the target. However, more experienced operators can discern the difference between a Laser-Designation lock source and a weapon lock source by the timing of the tone. Laser-Designated sources tend to keep the tone on ‘lock’ phase for considerable amount of time, whilst guided weapons fired at the vehicle will be constant and quick. It is best not to get distracted or tricked into deploying the counter measure prematurely.

To defeat the IR Smoke counter measure, the launcher or vehicle operator can choose to lock and fire the weapon but then instantly breaking weapon lock or enter the reload phase the instance the munition is fired. Most likely the target vehicle will prematurely deploy counter-measures whilst the guided munition flies skyward with no target. After counting 2 or 3 seconds, the weapon operator can re-acquire lock again as the target may be out of range of the IR Smoke's coverage. This is particularly simple and easier to accomplish via shoulder-fired missiles such as the FGM-148 Javelin as the missile angles upwards upon firing before adjusting its course. It is more difficult to accomplish via Jet aircraft as Laser Guided missiles tend to aim towards the ground after firing, regardless whether weapon lock has been achieved, broken or maintained. Laser Guided missiles from Attack Boats and Scout Helicopters (AGM-114 Hellfire) can also be utilised the same way as the Javelin to ensure the munition strikes the target. Vehicles targeted by this tactic can either choose to remain idle within the IR Smoke's effective range until the counter measure recharges or move toward a position where an unoccupied vehicle or gadget is deployed, as a bug in all guided munition will be force to prioritise into seeking and destroying unoccupied vehicles or gadgets first instead of occupied targets (reasons unknown).

Ironically, the counter measure can sometimes be harmful to friendly forces or even the vehicle itself it is supposed to protect. In such cases, hostile guided munition diverted away by the IR Smoke can impact to damage or kill friendly infantry or damage or destroy friendly vehicles.

IR Smoke being deployed whilst in first-person view.

IR Smoke as viewed under the customisation screen.
Add a photo to this gallery

Retrieved from "https://battlefield.fandom.com/wiki/IR_Smoke?oldid=358154"
Community content is available under CC-BY-SA unless otherwise noted.