Ilya Muromets Large Bomber Plane is a Codex Entry featured in Battlefield 1, introduced in the Battlefield 1: In the Name of the Tsar expansion. It is unlocked upon obtaining ten kills with the Ilya-Muromets. 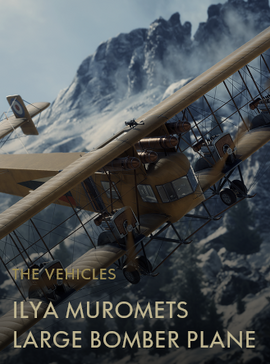 Named after a legendary Slavic knight, the Sikorsky Ilya Muromets were large four-engine airplanes that were converted to heavy bombers when the war broke out. With a wingspan of 98 feet (45 meters), they could transport up to 16 passengers and each was outfitted with a lounge, a bedroom, and even a toilet. The largest versions could carry a bomb load of 800 kg (1,760 lbs.), featured nine machineguns, and were protected by plate armor. They were the first bombers that flew in squadrons, and they introduced the concepts of bomber tactics, group raids, and long-range strategic bombings. Their armor and the many defensive machine guns, as well as having the first tail gunners, made them very difficult to bring down. In over 400 sorties and 60 tons of bombs dropped, only one was lost to enemy aircraft fire.

Retrieved from "https://battlefield.fandom.com/wiki/Ilya_Muromets_Large_Bomber_Plane_(Codex_Entry)?oldid=343299"
Community content is available under CC-BY-SA unless otherwise noted.