Imperial Russian Army is a Codex Entry featured in Battlefield 1, introduced in the Battlefield 1: In the Name of the Tsar expansion. It is unlocked upon winning a round as the Russian Empire. 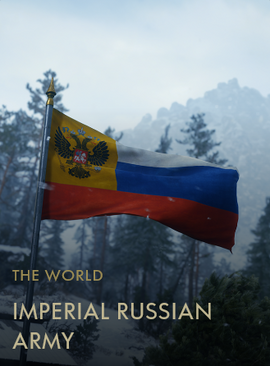 At the outbreak of the war, the Russian Empire was able to mobilize nearly 5 million men, in 115 infantry divisions and 38 cavalry divisions. The infantry was equipped with the vintovka-mosina version of the 7,62mm bolt-action rifle Mosin-Nagant 1891, and each infantry regiment, clad in modern green-khaki uniforms, fielded eight belt-fed and water-cooled Maxim M1910 machine guns and was supported by the Putilov 76.2 mm field gun. Alongside them fought the Lancers, Dragoons, Hussars, and Cossacks, all with long glorious military traditions of service. Airplanes and armored car divisions had the ability to quickly alter the dynamic of the battlefield, and Russia had two great advantages- land and men. There were, however, doubts that Russia´s military was really ready to fight a modern war. With a population of nearly 170 million people, the Russian Empire could call upon more soldiers than any other European nation, but coming from mostly agrarian, deeply religious, and often superstitious societies, the regular Russian conscript got little more than a rudimentary training of basic soldier skills. The high illiteracy rate made broad communications difficult, and this also affected complex tactical decisions. The General Staff and Officer Corps suffered from internal political scheming, mistrust, and personal jealousies between commanders, and rampant nepotism stood in the way of tactical innovation. Also, the belief that the bayonet was mightier than the bullet made soldiers’ lives expandable and casualties acceptable. Still, though Russia would suffer catastrophic defeats- Tannenberg, the Masurian Lakes- she would also achieve glorious victories, like the Brusilov Offensive, which nearly knocked Austria-Hungary out of the war. Also, Russia could give up endless amounts of land, drawing the enemy further and further from his supplies and reserves, leaving it open to a counterstrike. It was a mighty army indeed.

Retrieved from "https://battlefield.fandom.com/wiki/Imperial_Russian_Army_(Codex_Entry)?oldid=317034"
Community content is available under CC-BY-SA unless otherwise noted.