Improvised Firearms are firearms that are not made by weapon manufacturers or gunsmiths, and are constructed out of existing materials available to regular civilians. These weapons can range from being very crudely made weapons which are dangerous to operate to high-quality reproductions of existing firearms made from re-purposed materials. Popular in areas with strict gun-control laws, Improvised guns are generally illegal to own or create, and are commonly used by Criminals for violent crime or insurgent forces unable to acquire actual firearms.

An improvised firearm based off the PA Luty design appears in Battlefield Hardline as the Improvised Gun.

The Improvised Gun is a Machine Pistol introduced in the Battlefield Hardline: Betrayal expansion, exclusive to the Criminal Professional kit. It becomes available for purchase to Law Enforcement after achieving 1250 kills.

The Improvised Gun functions very similarly to the TEC-9, having the same damage and comparable spread. However, the weapon fires significantly faster at 950 RPM and has a magazine size of 30 rounds, as well as only being able to equip a specialty Suppressor. 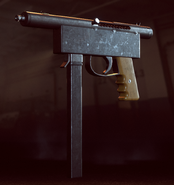 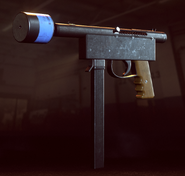 Aiming with the Suppressor equipped