In War We Are Equal is a Codex Entry featured in Battlefield 1. It is unlocked by winning one game of Domination. 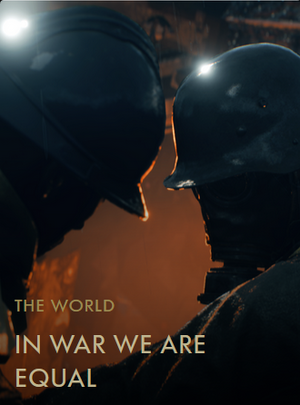 The Great War took place in a time when European nations still held firm control over colonial possessions in Africa and Asia. When the war broke out, the European nations mobilized colonial troops to join the fight on the continent - despite the ignorance of many European officers, who initially hold little respect for colonial soldiers.

But even though segregated in their own battalions, non-white soldiers from Algeria, Morocco, Nepal, Indochina, and many other parts of the world were soon standing in the same filthy trenches and charging over the same battlefields as their European comrades. Soldiers of different backgrounds came to respect one another as they fought side by side against the shared enemies and suffered the same hardships.

When the United States joined the war in 1917, the country was still racially segregated. Even though the U.S. Army allowed African American troops to serve in the regular army, they endured racism and prejudice. Some white soldiers refused to salute black officers, and officers' clubs and casinos were segregated. The harsh reality of the Western Front, however, gave all the men the same opportunity to prove themselves in combat. Perhaps the best-known black regiment of the U.S. Army was the 369th, the "Harlem Hellfighters". Integrated into the French 161st Division, they fought courageously at Chateau-Thierry and in Belleau Wood, and were awarded the French Croix de Guerre for their performance in the field.

Retrieved from "https://battlefield.fandom.com/wiki/In_War_We_Are_Equal_(Codex_Entry)?oldid=343150"
Community content is available under CC-BY-SA unless otherwise noted.