The Incendiary Arrow is a cut alternate ammo type to be used by the Phantom in Battlefield 4.

The Incendiary Arrow was an arrow type for the Phantom bow added to Community Test Environment in the August 22, 2015 patch alongside the Poison Arrow. The arrow had no textures, instead being covered in an orange silhouette.

The arrow functioned similarly to the M34 Incendiary on impact, creating the same kind of fire effect after detonating. Like the grenade, any enemy players caught in the radius of the detonation would take damage and would continue to take damage for a few seconds after escaping the fire. Like arrows, it was still capable of killing with a single headshot, but did less impact damage than the Broadhead Arrow or Bulletpoint Arrow.

The Incendiary Arrow was later removed in a subsequent update to the CTE, while the Poison Arrow remained and was later released in the retail game alongside Operation Outbreak with the Community Operations expansion. 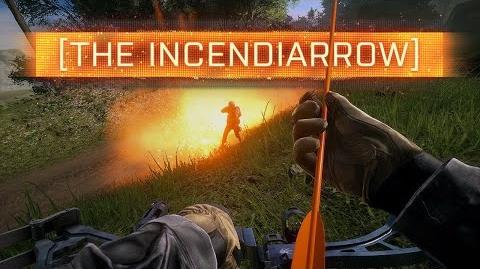