Infantry Tactics is a Codex Entry featured in Battlefield 1. It is unlocked upon completing a squad order three times.

THE EVOLUTION OF INFANTRY TACTICSEdit 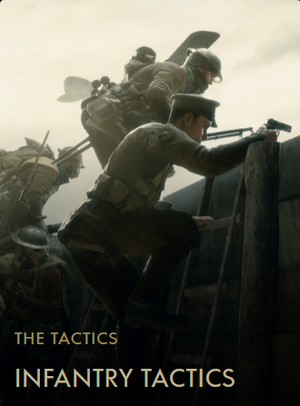 As the war began, soldiers on all sides marched in densely packed formations over open ground only to become prey to overpowering modern weaponry like machine guns. Contrary to popular belief, many military thinkers quickly realized that tactics had to change. Combat patrols and trench raiders soon began to experiment with the idea of decentralized leadership, giving the NCOs and low-ranking officers the chance to lead from the front and to react to quickly changing situations. This new flexibility soon altered the way infantry moved into combat, as smaller but highly specialized assault squads emerged from training camps with names like Stormtroopers, Arditi, or Jagdkommando.

Different teams and weapon groups had to closely interact with each other to maximize their effectiveness. Pioneers would cut gaps in enemy barbed wire, and mobile field mortar teams and machine gunners would open up, providing support and pinning down the surprised defenders. Rifle grenades whistled into the trenches and flamethrowers blazed into the dugouts as the heavily armed shock infantry jumped into the lines and onto their enemies. Fighting in the close quarters of the trenches turned into brutal hand-to-hand combat. Instead of the cumbersome bayonet, the soldiers hacked and stabbed at each other with knives, sharpened spades, clubs, and brass knuckles. Dozens of hand grenades exploded within moments, creating a storm of shrapnel. By the final battles of the war, the new breed of professional soldiers were the stars driving a wedge through the enemy's defensive lines.

Retrieved from "https://battlefield.fandom.com/wiki/Infantry_Tactics_(Codex_Entry)?oldid=343347"
Community content is available under CC-BY-SA unless otherwise noted.