He accompanies Jonathan Miller in the missions Thunder Run and Fear No Evil as the loader for their M1 Abrams tank under the call sign Anvil 3-3. He speaks to Miller most of the time by radio, acting as an adviser. He reports the status of the tank when it is hit and will compliment Miller when he destroys enemy tanks. During the ambush at overpass "Alter", Ingham provides covering fire with the Abrams' coaxial MG while Miller retrieves the detonator for the mine clearing charges.

While his fate is never fully explained, it is possible he may have been captured and executed (though not seen) along with Miller after the tank is overrun at the end of Fear No Evil. 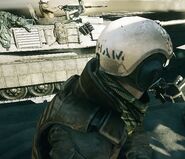 Ingham character model.
Add a photo to this gallery

Retrieved from "https://battlefield.fandom.com/wiki/Ingham?oldid=377824"
Community content is available under CC-BY-SA unless otherwise noted.