Into Argonne Forest is a Codex Entry featured in Battlefield 1. It is unlocked upon winning any gamemode on the map Argonne Forest. 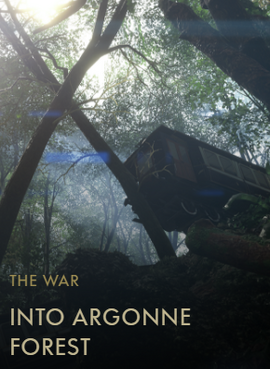 The shadowy depths of the Argonne Forest provided the setting for the Meuse-Argonne Offensive. This was part of the final Allied Offensive that end with the armistice on November 11th, 1918. Its objective was to take the railway hub at Sedan, breaking the German supply network to France and Belgium.

It would be no easy task; the deep forest was a labyrinth, teeming with German machine gun defenses. And while there was well over a million American troops attacking, they were inexperienced and would face nearly half a million dug in Germans, battle hardened and resolved to hold their ground.

Retrieved from "https://battlefield.fandom.com/wiki/Into_Argonne_Forest_(Codex_Entry)?oldid=343323"
Community content is available under CC-BY-SA unless otherwise noted.